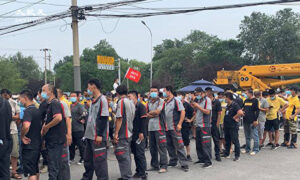 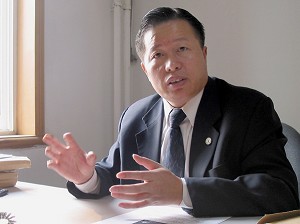 On December 12, the renowned human and civil rights lawyer Gao Zhisheng published his third open letter to Chinese President Hu Jintao and Chinese Premier Wen Jiabao to speak for Falun Gong. Risking his business and his license, he once again disclosed the severe persecution towards Falun Gong practitioners in the past six years. This letter has shocked the world and has in the meantime spread to many overseas media and among the people in China. It has also caused criticism on the brutality of the Chinese government. Soon after, Gao Zhisheng published his resolute announcement to withdraw from the Chinese Communist Party (CCP). While people are applauding his courage, they are also concerned for Gao's safety and how the CCP will respond. On December 16, the Chinese judicial authority forced one of the three lawyers of the Shengzhi Law Office to leave the firm. According to Chinese judicial rule, a law firm needs to have a minimum of three lawyers. As a result, the Shengzhi Law Office is facing closure.

In his nearly 10 year long career being a lawyer, Gao Zhisheng has tried his best to help the large group of underprivileged people who have no way to obtain justice. Abiding the law and fulfilling the responsibilities of a lawyer's, has made him a target of the CCP. The CCP claims that it is becoming 'open-minded and tolerant' and that it has allowed Gao to stay in business. But since Gao touched upon the Falun Gong issue – a critical issue that the CCP is most scared to touch upon – the Chinese government has been trying to put him out of business without hesitation.

Closing Gao Zhisheng's law firm 'in accordance with the law' is still not sufficient for the Chinese government to feel at ease. It has also confiscated qualification certificates of the law firm's legal persons, and the official, financial and personal sealing stamps. [1]

In China, a law firm is required to have a minimum of three lawyers in order to be qualified for business. When the Beijing Municipal Bureau of Justice ordered Gao Zhisheng's law firm to stop business for one year, Gao had to let go eight of his nine employees in order for them to be able to continue making a living. At this critical stage, a lawyer from Zhejiang Province accepted employment with Gao's law firm and this temporarily helped the firm to survive. Although the new lawyer knew in advance what to expect at his new job, he was unable to handle the pressure. He called Gao in the afternoon of December 16 and told him: “Please forgive me, but I have to resign today.”

Lawyer Gao stated: “The punishment enforced upon us by the Bureau of Justice is illegal. We definitely will appeal against it, but at present, they have forced one more of the remaining lawyers in my office to leave; with only one lawyer and myself left, my law office will be unable to exist legally!

Currently, the Shengzhi Law Office has annual operational expenses of 200,000 yuan (US $25,000) and additional monthly expenses of nearly 20,000 yuan (US $2,500), including rent, utilities and the salaries for its accountant, treasurer and the two remaining lawyers. A large part of his expenses are travel expenses. Gao Zhisheng represents the poor people and as such he usually does not charge them for his services.

Gao Zhisheng stated: “The CCP can suppress anyone's voice. When you want to do something for disadvantaged people, there are a bunch of demons interfering with you, while they are comfortably sitting in their air-conditioned offices!”

One insider from the Bureau of Justice disclosed: “The current decision from the Beijing Municipal Bureau of Justice to force this lawyer to leave was made, so as to completely bring down the Shengzhi Law Office. It also forbids any other law firm to hire any lawyer from the Shengzhi Law Office, including Gao Zhisheng himself. Therefore, Gao Zhisheng will never be a lawyer again! This decision was made by the Ministry of Justice.”

Notes: [1] Chinese enterprises use sealing stamps to identify themselves. These stamps carry a person's or an organization's names and serve as legal signatures.