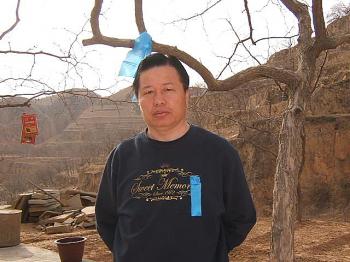 Gao Zhisheng at his childhood home in 2007, prior to his arrest and torture. (The Epoch Times)
China

In a recently published article, Chinese human rights attorney Gao Zhisheng disclosed the inhumane torture he suffered in the 50 plus days when he was kidnapped and secretly detained by the authorities in Sept. 2007. The kidnapping happened after he wrote an open letter to the U.S. Senate talking about China’s human rights abuses.

The gruesome details of the tortures enraged the world, and raised serious concerns about Gao’s safety, because on Feb. 4 Chinese police again took Gao from home by force and Gao has not been heard from since then.

In his article titled “Dark Night, Dark Hood and Kidnapping by Dark Mafia,” Gao describe how the abusers beat him with electric shock prods until every square inch of his skin was bruised, how they smoked his eyes with cigarettes, and how they shocked his genitals with electric shock batons and pierced them with toothpicks. The torture continued for over 50 days, and Gao lost consciousness again and again.

After the article was published, many soon voiced their indignation and concerns. Among them are three Chinese attorneys who, like Gao, have defended the rights of China’s most persecuted group, Falun Gong. They are Li Heping, Jiang Tianyong and Li Xiongbing.

Beijing attorney Jiang Tianyong said what concerned him most was the whereabouts of Gao. “Now that he has revealed his experiences to the world, I fear the authorities would torture him more fiercely than in 2007,” said the worried attorney.

Jiang said many people must find Gao’s story shocking and unbelievable, but he did not doubt any detail in the article given his own experiences and what he knows about Gao. “Such tortures do exist in China. Their existence in today’s world is an unpardonable insult to Chinese people, and to the entire human being,” Jiang said. “Those people are inhuman. As Chinese say, they are lower than animals.”

Jiang also pointed out that the abusers would not dare to do what they did if they hadn’t received orders from higher authorities. The fact that they were not brought to justice also proved that the higher authorities are responsible for what happened, he said.

“I urge all the conscientious people in the world to pay attention, and to demand to know the whereabouts of Attorney Gao,” Jiang said. “It is high time for the world to reflect, to act and to stop such things from happening again and again.”

When the abusers were torturing Gao in 2007, Beijing attorney Li Heping was also kidnapped and beaten up for defending Gao’s legal rights and the rights of some Falun Gong practitioners. “I have known a lot about torture in China, but what I read in Attorney Gao’s article still shocked me,” said Li. “What they did is ugly and inhumane. I can only say it’s not what humans are capable of doing. There’s no word strong enough to condemn such behaviors.” Li demanded the immediate termination of torture in China.

Attorney Li Xiongbing also condemned the tortures used on Gao, saying it is not only illegal, but also below the bottom line of human ethics. “After reading the article, a deep lasting sorrow filled my heart,” Li Xiongbing said. “What evil can drive people into such madness as treating a fellow human being like this?”