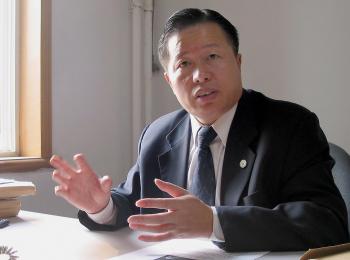 Gao Zhisheng at his office in Beijing in November 2005. (Verna Yu/AFP/Getty Images)
China

News that China’s human rights lawyer, Gao Zhisheng, is not being mistreated by authorities in China is “laughable,” says Professor Donald C. Clarke of George Washington University Law School on his blog.

Gao, a stalwart for representing repressed groups in China such as Falun Gong practitioners and Christians, has been harassed, tortured, and detained by Chinese authorities since 2005.

Gao was taken from his family’s home by authorities in February this year and has not been seen since. His wife and two children escaped to the U.S. shortly after Gao’s disappearance and now reside in the New York area.

From 2004 Gao wrote several open letters to the leaders of the Chinese regime criticizing their human rights record, particularly their persecution of Falun Gong. He also wrote an open letter to the U.S. Congress in 2007 and this year released a vivid account of more than 50 days of torture he suffered while in captivity by the regime in 2008.

John Kamm of the Duihua Foundation said Gao was not being mistreated and was free to visit his hometown in June, citing information he obtained from the Chinese Embassy in Washington.

Kamm spoke at a Congressional Executive Commission on China (CECC) hearing titled “Human Rights and the Rule of Law in China” in Washington D.C. Wednesday.

“In late June, Gao Zhisheng was allowed to return to his home village in Shaanxi Province to pay his respects to his ancestors,” Kamm said, relaying the information he had received from the Chinese Embassy. “He is not being mistreated and is not being subjected to coercive legal measures.”

Clarke also testified at the CECC hearing and said on his blog: “The claim that he is not being subjected to ‘coercive legal measures’ is of course beyond laughable, and in contradiction to the notion that he was “allowed” to return to his home village."

Beijing legal scholar and rights activist Teng Biao has reported that Gao was in contact with his family briefly in July.

Gao’s wife, Geng He, published an open letter on Oct. 3 titled, “Gao Zhisheng, my husband and the father of my children—where are you?” She wrote that she and her children have worried terribly about Gao because they had not heard anything from him for the past 10 months, and do not know whether he is alive or not.

Clarke said the information presented at the CECC hearing represented some kind of progress: “At least the [Chinese] government is now admitting that it has information about Gao.”