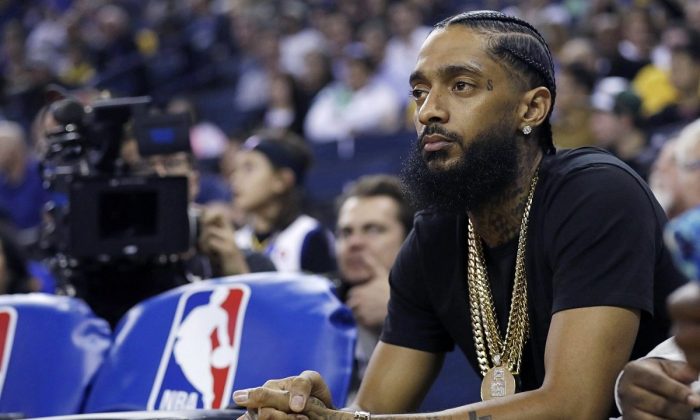 The rapper Nipsey Hussle watches an NBA basketball game between the Golden State Warriors and the Milwaukee Bucks in Oakland, Calif., on March 29, 2018. (Marcio Jose Sanchez/AP Photo)
Crime and Incidents

Several gang leaders had a “unity meeting” and reportedly reached a full peace treaty after rapper Nipsey Hussle was shot dead at the age of 33 in South Los Angeles on March 31.

“@NipseyHussle Look what you started 60’s, HOOVAS, ETG’s, FTG, VNG, BOUNTY HUNTERS, MONA PARKS, BRIMS, PIRUS, BLOODS, CRIPS, GANGSTAS, NH’s, DEUCES,” Diamond wrote. “Just some of these hoods in the same building is POWERFUL! Trying to use Their BLACK POWER TO BRING UNITY TO THE CITY!.”

“I pray that we can stay on this positive path,” he added.

The shooting took place at 3:20 p.m. local time on March 31 outside of a clothing store owned by Hussle, whose real name is Ermias Asghedom, KNBC-TV reported. Asghedom’s store, The Marathon Clothing Company, is located on Slauson Ave. just west of Crenshaw Blvd.

Tonight’s homicide in South LA represents the latest loss in a troubling surge in violence. Since last Sunday 26 victims have been shot & 10 homicides—that’s 36 families left picking up the pieces. We will work aggressively with our community to quell this senseless loss of life. pic.twitter.com/1fsJXCcflS

Hussle, who was also a member of the Rollin 60s Neighborhood Crips Los Angeles gang, was reportedly set to meet with the Los Angeles Police Department (LAPD) to discuss gang violence, according to Complex Magazine.

The meeting with LAPD would have been at 4:00 p.m. the day after Hussle was fatally shot.

During the April 4 meeting, the gang leaders agreed to put down their firearms and show more unity starting with a march, which was held on Friday, April 5, TMZ.com reported.

The suspect in the shooting was identified as 29-year-old Eric Holder, who knew Hussle and had some kind of personal dispute in the hours before the rapper was killed, according to LAPD.

He was charged with murder and two counts of attempted murder in connection with the March 31 incident which left the rapper dead and two other men wounded, the Epoch Times reported.

Holder was ordered held on $5 million bail after pleading not guilty to murder and attempted murder charges on April 4.

His attorney, Christopher Darden, did not dispute the bail amount, which the prosecution requested. Darden declined to comment after the hearing.

L.A. mourns the loss of one of our own, Nipsey Hussle. pic.twitter.com/7DovnRkayn

According to TMZ, the funeral service of the slain rapper will be held on Thursday, April 11, at the Los Angeles Staples Center, a 21,000 seat venue.

The Associated Press and Epoch Times Reporter Jack Phillips contributed to this report.