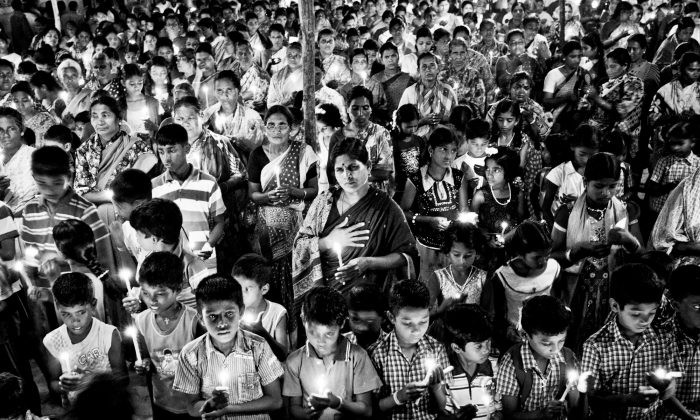 Villagers near the Kudankulam nuclear power plant site in Tamil Nadu State, India, observe a candlelight vigil to pay homage to Hiroshima victims on Hiroshima Day on Aug. 6, 2012. For more than a year, protests have surrounded the Kudankulam site. (Amrithraj Stephen)
India

Amrithraj Stephen, an Indian photojournalist expected another Biriyani protest near the site of a planned nuclear plant in the coastal village of Idinthakari in Tamil Nadu State, India.

What he found instead was a nonviolent mass uprising rarely seen since Mahatma Gandhi passed away more than six decades ago.

“Until now, I had just seen Biriyani protests, but here for the first time I saw a real Gandhian protest,” Stephen said.

He explained that Biriyani protests involve mostly unemployed youth or other economically disadvantaged people who gather in protests organized by political parties “after being promised some Biriyani and money.” Biriyani is a popular Indian dish. It is common for political parties in Tamil Nadu to organize their supporters to protest by offering biriyani and money at the rallies.

Stephen was in New Delhi when the protests began. It was during a trip to his village of origin near Idinthakari that curiosity brought him to the site. “The moment I went there and saw the energy of the mass protests, I felt it’s not just a protest, but a revolution,” he said.

Stephen talked to the protesters, felt their concerns were genuine, and started taking photographs.

“The regional media of Tamil Nadu is owned by various political parties, and it was giving very biased reporting from the ground,” Stephen said. “I then decided to document it fully.”

For more than a year the protests in Idinthakari against the nuclear power plant under construction in nearby Kudankulam have continued. Spearheaded by the People’s Movement Against Nuclear Energy (PMANE) in Tamil Nadu, the protests demand the plant not open.

According to Stephen, until March 2012, the state government of Tamil Nadu supported the protesters.

“In March 2012, when the Tamil Nadu by-poll results were announced, the state government did a U-turn and said the plant is safe. Then I saw mass anger and the village was immediately surrounded by police. All basic supplies, water, and electricity were stopped to the village for few days,” Stephen said.

In an interview with Mail Today, PMANE leader Uday Kumar also said the government supported the movement before the October 2011 civic elections to reap a rich electoral harvest, afterward turning against the movement. Soon after the state assembly by-polls, the government launched a crackdown on the protesters, Kumar said.

Not Just a Protest, But a Way of Life

The protests have transformed the community, Stephen said. “The peaceful protests in Idinthakari have become a lifestyle for people.”

Kumar calmed an agitated crowd on one occasion, saying people should remain peaceful even if it takes a long time for the protest to have an effect, recalled Stephen. The crowd immediately calmed down, recalled Stephen. He also lauded the decision within the community of protesters to give up drinking alcohol on a large scale.

“During the protests an initiative was taken that no one in the community would drink alcohol. Everyone has not [stopped drinking] yet, but the rate of alcohol consumption has drastically come down,” he said.

Stephen said he sees at the core of one of the longest modern mass protests in India—the one against the Kudankulam plant—are the values of nonviolence, voluntarism, and community togetherness.

“This protest is not about one nuclear plant, but [about] the whole nuclear industry in the country. It is also about how democracy functions in India,” said Stephen.

In the latest protests, nearly 500 boats from 10 coastal villages in the Tirunelveli District participated in the siege of the Kudankulam nuclear plant from the sea front.

“I started to learn about Gandhian ways only because of this protest,” Stephen said. “Even a commoner in the protesting community talks about Gandhian ways. Lots of people here are with thoughts of non-violence. Such a change has happened.”