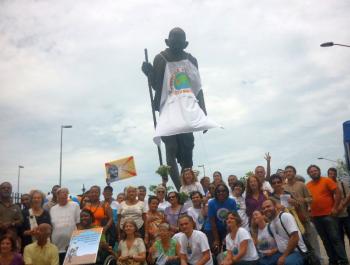 A statue of Gandhi was dressed in the World March's T-shirt at the rally. (Felipe Santiago/The Epoch Times )
World

By Felipe Santiago
Print
RIO DE JANEIRO, Brazil—Pacifists gathered in Mahatma Gandhi Square on Oct. 2 for the opening ceremony of the World March for Peace and Nonviolence, the same day as Mahatma Gandhi’s birthday and Nonviolence International Day. In a symbolic act, the activists dressed Gandhi’s statue with their movement’s shirt and, hand in hand, sang songs about world and inter-religious peace.

Marco Pantoja, the World March’s spokesperson in Rio de Janeiro said, “Our humanist proposals lie in five goals; namely, nuclear disarmament at a global level; the immediate withdrawal of invading troops from occupied territories; the progressive and proportional reduction of conventional weapons; the signing of non-aggression treaties between countries; the renunciation by governments of the use of war as a means to resolve conflicts.“

According to its official Web site, the World March starts on Oct. 2 in New Zealand and its route will include six continents and 90 countries, crossing a distance of 160,000 kilometers (99,419 miles) during 90 days. The movement numbers, with 500 co-organizing institutions, 3,000 collaborating and supporting institutions, 1 million participants in the tour and 10 million virtual participants.

“New Zealand has been chosen as the starting point due to its strong legislation regarding disarmament. … The only country that didn’t support us was China, because of the Dalai Lama’s adherence to the March. The Chinese government said that if we accepted his support, they wouldn’t let us include China on the World March for Peace and Nonviolence’s route,” said Mareli Penteado, one of the organizers in Rio de Janeiro.

The main justification for the movement is that it would be possible to end the world hunger with 10 percent of what is currently spent on arms and that 30 percent to 50 percent of the arms budget should go toward improving people’s lives instead of weapons. “Eliminating wars and violence means leaving human pre-history behind and taking a new step forward in the evolution of our species,” Penteado said.

The movement will pass through the world’s cities in the form of meetings, festivals, conferences, and cultural events. Initiatives can be organized by anyone who has joined the movement through the Web site www.theworldmarch.org.