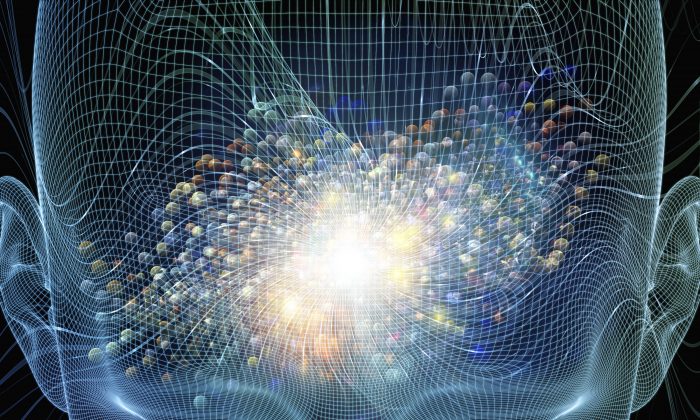 The alarm sounds at 6:30 a.m. You groggily turn it off. Maybe you faintly recall a dream for a minute or two. You then quickly jump out of bed and hop in the shower to prepare yourself for a day of work, school, and/or tending to the family.

From this point until you return to a state of quietness at night, you are likely to predominantly spend your day in the brainwave state known as “Beta.”

This state correlates with the frequency range between 12 and 30 hertz (Hz). Generally speaking, when people are in this state, they are experiencing varying degrees of being alert, engaged, and having focused mental activity.

At the lower end (12–15 Hz), one’s mood could be described as slightly brooding or idling. You’re stuck in traffic or casually surfing the Web.

At the mid-range of Beta (16–22 Hz), one could be characterized as being strongly engaged. You’re actively analyzing a problem and searching for a solution, for example.

The upper range of Beta (23–30 Hz) correlates with highly complex thought, the integration of new experiences, and excitement. The problem is intricate and requires your creativity.

Below Beta is Alpha (8–12 Hz). You’re day-dreaming or in a non-engaged, relaxed state while watching television. It’s not “overly” relaxed to the point of grogginess, but the stress of your daily routine is markedly absent both physically and mentally.

Below Alpha is Theta (4–8 Hz). It coincides with deep relaxation and possibly even light sleep. Theta is also recognized as a brainwave state induced during deep hypnosis, deep meditation, and sensory deprivation tank experiences.

The slowest type of brainwave, Delta, correlates with deep sleep; it measures between 0.5–4 Hz. Experienced meditators have also been known to attain this state during meditation.

But it isn’t that simple.

Gamma waves are classified as having a frequency of 30 Hz and above.

Gamma Waves and the ‘Aha!’ Moment

In 2009, a study was published in the journal Current Directions in Psychological Science, titled “The Aha! Moment, The Cognitive Neuroscience of Insight,” led by John Kounios at Drexel University and Mark Beeman at Northwestern University. The study concluded that insight solutions or “Aha!” moments are positively correlated with bursts of Gamma waves.

Brain World magazine described the findings: “In the volunteers that experienced insight, Kounios and Beeman found a distinctive spark of high gamma activity that would spike one-third of a second before volunteers consciously arrived at an answer.

Gamma activity indicates a constellation of neurons binding together for the first time in the brain to create a new neural network pathway. This is the creation of a new idea.

“Gamma activity indicates a constellation of neurons binding together for the first time in the brain to create a new neural network pathway. This is the creation of a new idea. Immediately following that gamma spike, the new idea pops into our consciousness, which we identify as the Aha! moment.”

The gamma burst was preceded by an Alpha lull in activity. It appears there might be some basis for purposely quieting the mind and slowing the brain waves in order to consciously generate Gamma waves.

If these moderate Gamma bursts created Aha! moments, what types of intuitions or experiences can people have at 50 Hz, 60 Hz, or 70 Hz and above?

If these moderate Gamma bursts created Aha! moments, what types of intuitions or experiences can people have at 50 Hz, 60 Hz, or 70 Hz and above? Since these Gamma waves take place in split-second bursts, what would happen if the waves could be sustained for prolonged periods? Can we intentionally foster these waves?

In 2005, a study on the effects of dimethyltryptamine (DMT) published in the Journal of Psychoactive Drugs reported “increases in global EEG coherence in the 36–44 Hz and 50–64 Hz (Gamma Hz) frequency bands.” This study externally administered DMT, but DMT is also naturally occurring in the body.

In 2008, the Journal of Neuroscience published a paper outlining the relationship between Theta and Gamma coordination during rapid eye movement (REM) sleep. REM is associated with dreaming.

Remember the lull before the Aha! moment spike in the study we discussed earlier? In this sleep study, the lower (Theta) frequency and the high Gamma frequency occurred simultaneously much more frequently in REM sleep than in the waking state.

The study stated: “The gamma power increase … typically peaked around 100 Hz, but the elevated power in these bursts often extended up to around 250 Hz.”

The elevated power in these bursts often extended up to around 250 Hz.

Neuroscientist Richard Davidson’s 2004 study on the energy emitted by Tibetan meditating monks found some of the monks produced Gamma wave activity more powerful and of higher amplitude than any documented case in history.

Experiences occurring during “dream” states are largely attributed to intelligible hallucinations. However, there are a few cases in which the information derived or interpreted during these dreams have led to important discoveries in science–Albert Einstein’s speed of light, and Neils Bohr’s atomic model, for example. Some of these significant findings are outlined by Epoch Times reporter Tara MacIsaac in “5 Scientific Discoveries Made in Dreams” and “4 More Scientific Discoveries Made in Dreams.”

Does this equate to all dreams providing profound world changing information?

Not likely, but imagine what type of insights we might have in a conscious waking state of problem solving if we were able to generate 250 Hz at will.

This article was originally published on Q4lt.com