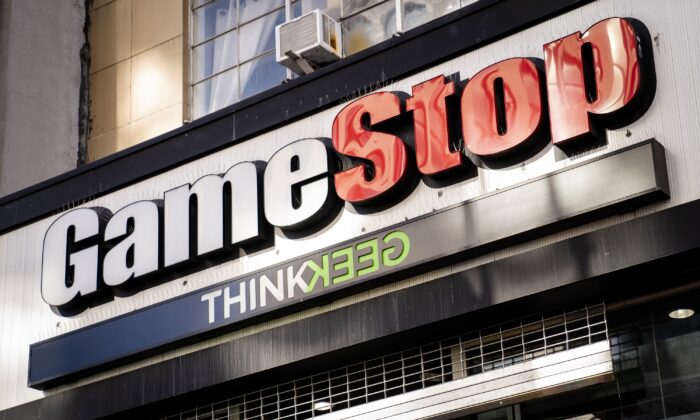 Trading of GameStop stock was halted by Nasdaq four times on May 12 as the share price kept rising and falling dramatically amid the index registering a decline.

GameStop came into the spotlight last year after a group of retail traders coordinated their activities via online chatrooms and created a big squeeze in the stock that was seen negatively by hedge funds and other investors. The coordinated actions ended up creating big losses for many short sellers and hedge funds that had taken positions in these stocks.

After peaking at around $480 per share on Jan. 28, 2021, from around $17 earlier that month, the stock fell to around $41 on Feb. 19, 2021, and has been moving in an irregular fashion ever since. As the stock has come down from its peak position, short sellers are once more building up positions in the shares.

At present, the short interest in GameStop is at 21.4 percent according to FactSet. Short interest measures the portion of a company’s available shares that are sold short. Such big bets against a company can trigger a rally in a given day if the hedge funds and other investors briskly close off their short positions by buying up stocks.

GameStop had recently announced that it planned to do a stock split—the first time in 15 years. In a stock split, the number of stocks an investor holds gets increased in a specific ratio without loss of total share value.

For instance, if a stock split is set at a ratio of three-for-one and an investor holds a single share at $150, then the split will give the investor three shares of $50 each. GameStop is expected to ask shareholders for approval of the stock split during this year’s annual meeting.

In a regulatory filing, the Texas-based company said that it wanted to increase its share count from the current 300 million to a billion. GameStop has only implemented a stock split once before. Back in 2007, when its share was trading at around $50, the company had done a two-for-one split.