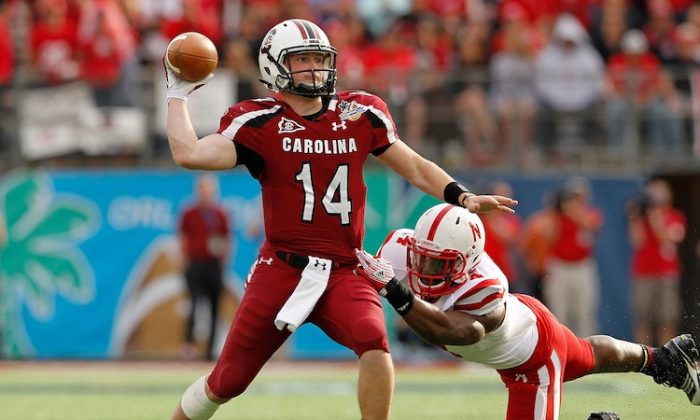 Gamecocks With Milestone Win Over Nebraska

South Carolina quarterback Connor Shaw threw for 230 yards and two touchdowns as the Gamecocks (11–2) established a new school-record for most wins in a season by downing Nebraska 30–13 (9–4) Monday in the Citrus Bowl.

Shaw’s efficient production came on just 17 pass attempts (netting 11 completions) as the run-happy Gamecocks ran the ball 40 times for 121 yards against the Cornhuskers’ defense. South Carolina gained 351 total yards on the day, without turning the ball over, while Nebraska put up just 253 yards and turned the ball over twice.

The game turned on a “Hail Mary” pass play just before the end of the first half. With Nebraska leading 13–9 and just six seconds remaining until halftime, Shaw’s desperation pass was caught by receiver Alshon Jeffrey for a 51-yard touchdown to give the Gamecocks a lead they never relinquished.

Nebraska quarterback Taylor Martinez finished the day going 10/16, passing for 116 yards and a touchdown. He led the Cornhuskers to a pair of first-quarter scores, but was subsequently shut out for the final three quarters.