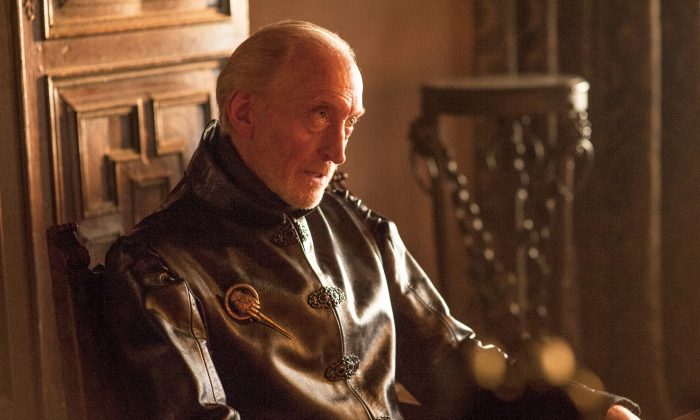 This image released by HBO shows Charles Dance in a scene from "Game of Thrones." The fourth season premieres Sunday at 9p.m. EST on HBO. (AP Photo/HBO, Helen Sloan)
Entertainment

The finale Game of Thrones’ last season had a major plot development involving Tywin Lannister, who was killed by his own son while sitting on the toilet, but Season 5 might feature a plot twist fans of the book series might not like.

“I’m not completely missing out on the next series. More than that, I’m not going to say,” Tywin actor Charles Dance told MTV. “You haven’t seen the last of Tywin Lannister, is all I’ll say.”

Dance could be referring to appearing in a flashback or a dream, or his corpse at his funeral, or something else, but there’s been some speculation that he didn’t die after all. In the books, his character is completely killed off by his son.

“You haven’t seen the last of Tywin Lannister,” he said.

The Winter is Coming site speculates: “A more likely path, and one the show has gone down before with another dead patriarch, is that somehow Tywin could be used as a mouthpiece by another force, as Khal Drogo was used to deliver a prophecy to Dany at the end of Season 2.”

It adds: “Alternately, Game Of Thrones could start utilizing flashbacks, a narrative tool that it’s avoided (somewhat surprisingly.) An argument in favor of both the flashback and the prophecy is that this season, much like A Feast For Crows, will have a big focus on Cersei Lannister.”

Meanwhile, the Daily Mail reported that the cast and crew headed to Northern Ireland to film scenes for Season 5 this week.

“But it was back to Northern Ireland on Tuesday with the team working overtime shooting scenes along the cliff edge of Binevenagh Mountain, near County Londonderry,” the tabloid writes.