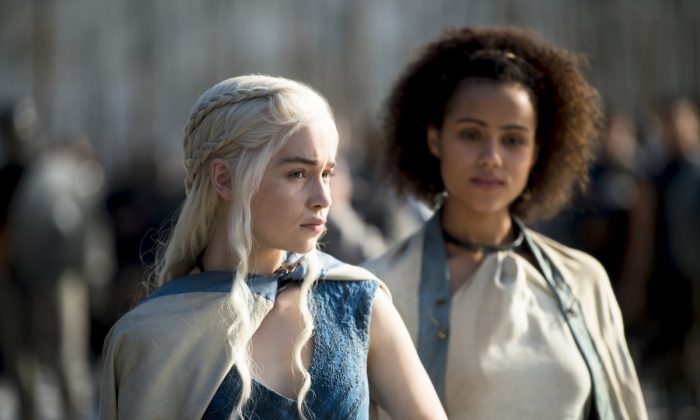 Game of Thrones Season 4, Episode 8 ‘The Mountain and the Viper’; Oberyn Martell-The Mountain Gregor Cleagane to Battle in a Couple Weeks?

“Game of Thrones” Season 4, Episode 8 will be on Sunday in two weeks’ time.

The episode, titled “The Mountain and the Viper,” will show on June 1.

The next episode will likely show Oberyn fighting against The Mountain.

Tyrion speaks with Jaime about his situation while in prison, but Jaime says he can’t fight for his brother in a trial by combat. Jaime chastises Tyrion for falling in love with Shae, the prostitute who testified against him. Later in the episode, Tyrion speaks with Bronn, who informs him that he’s getting married. He then talks about fighting The Mountain.

“I’m your friend, and when have you ever risked your life for me,” he tells Tyrion. “I like you … I just like myself more. I’m sorry it has to be this way.” Tyrion, however, doesn’t get angry and they say farewell to one another.

Oberyn Martell then visits him later, saying his sister approached him. Oberyn then said he saw Tyrion when he was born years ago. “‘That’s not a monster,’ I told Circe. ‘That’s just a baby,” Oberyn says. He then says that Circe developed a hatred for Tyrion since she was young. Oberyn then says he wants “justice … for his sisters … I want to bring those who wronged me to justice. I will begin with Ser Gregor Clegane.

“I will be your champion,” he then tells Tyrion.

Next comes The Mountain, Ser Gregor Cleagane, who is seen killing men in the capital. “Who am I fighting,” he says. Cersei tells him it doesn’t matter and he concurs.

And the series finale’s name is “The Children,” according to HBO, and it shows in mid-June.

Bryan Cogman, a “Game of Thrones” writer, talked about this season.

He said the final episodes of this season will be well-done, according to Entertainment Weekly.

“Yeah. It’s relentless from now on. There’s no going back now for a lot of these characters. The rest of the season is based on the last third of A Storm of Swords so it’s one big climax,” he said.