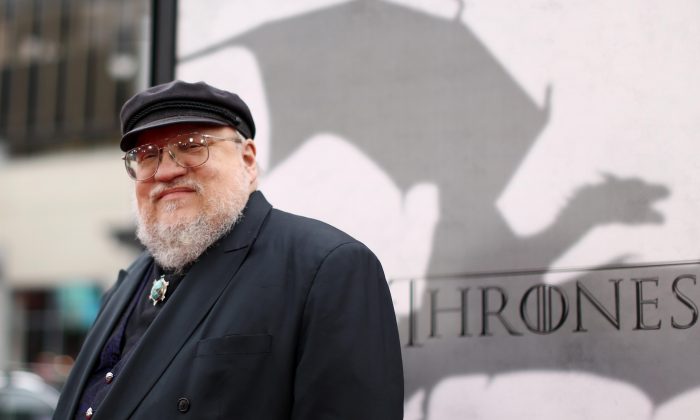 Author George R.R. Martin arrives at the premiere for the third season of the HBO television series "Game of Thrones" at the TCL Chinese Theatre in Los Angeles on March 18, 2013. In a Jan. 2, 2016, blog entry, Martin acknowledges he missed the Dec. 31 deadline for the latest book in the "Game of Thrones" fantasy series, titled “The Winds of Winter,” and the finished novel is still months away. “Game of Thrones,” the HBO television season based on the novel will start airing in April 2016, while he’s still writing. (Matt Sayles/Invision/AP)
Entertainment

‘Game of Thrones’ Author Blogs That He Missed Book Deadline

NEW YORK—For fans of George R.R. Martin, winter is not coming—at least not right away.

The “Game of Thrones” author says he missed a Dec. 31 deadline to finish “The Winds of Winter,” the sixth book in his popular fantasy series. That means the next HBO season based on the novel will start airing in April, before the book is published.

The words “you won’t like it” appeared Saturday on Martin’s blog, reporting that “the book’s not done. … I tried, I promise you. I failed.”

Martin says he is working with HBO to ensure the show reflects the next installment of the “A Song of Ice and Fire” books—in which characters warn of impending doom with the phrase “Winter is coming.”

With hundreds of pages and dozens of chapters written, Martin said he estimates it will still take months more if the writing goes well.

“You can blame my travels or my blog posts or the distractions of other projects and the Cocteau and whatever, but maybe all that had an impact,” he wrote, referring to the single-screen Jean Cocteau Cinema he purchased and fixed up in Santa Fe, New Mexico, where he lives.

“For months now I have wanted nothing so much as to be able to say, ‘I have completed and delivered The Winds of Winter’ on or before the last day of 2015,” the 67-year-old author blogged.

The truth is “sometimes the writing goes well and sometimes it doesn’t, and that was true for me even when I was in my 20s,” he wrote.

Messages left at Martin’s office and the cinema were not immediately returned.