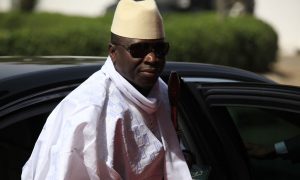 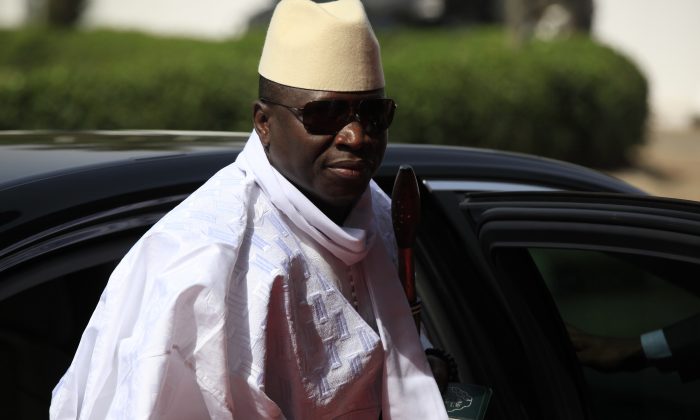 Gambia's President Yahya Jammeh arrives for a summit to address a seminar on security during an event marking the centenary of the unification of Nigeria's north and south in Abuja, Nigeria, Feb. 27, 2014. (AP Photo/Sunday Alamba)
Africa

Jammeh, who was out of the country at the time of Tuesday’s attack but has since returned to Banjul, the capital, alleged that the coup plotters had received backing from some foreign countries.

“I live for the Gambia and I will die fighting for the truth. No human being can do anything to me, my government or the Gambia,” Jammeh said. “It was not a coup. It was an attack by dissidents based in the US, Germany and United Kingdom.”

After hours of fighting, forces loyal to Jammeh’s regime succeeded in getting the upper hand, killing five insurgents. It was not immediately known how many casualties were suffered by the national military.

“We are all gripped by fear,” said one Banjul resident, who spoke on condition of anonymity for fear of reprisals.

Gambia is a small sliver of a country surrounded by Senegal where human rights activists say Jammeh has long targeted political opponents, journalists, and gays and lesbians.

U.N. Secretary-General Ban Ki-moon has called for “a transparent investigation” into Tuesday’s events that respects human rights, due process and the rule of law, U.N. spokesman Farhan Haq said.

Jammeh is one of Africa’s most vocal anti-gay leaders and has previously threatened to behead sexual minorities found in his country. The U.S. government recently removed Gambia from a trade agreement in response to human rights abuses, including a law signed in October that imposes life imprisonment for some homosexual acts.

Jammeh also drew swift condemnation from activists in 2007 after he insisted that HIV-positive patients stop taking their antiretroviral medications, claiming he could cure them with an herbal body rub and bananas.