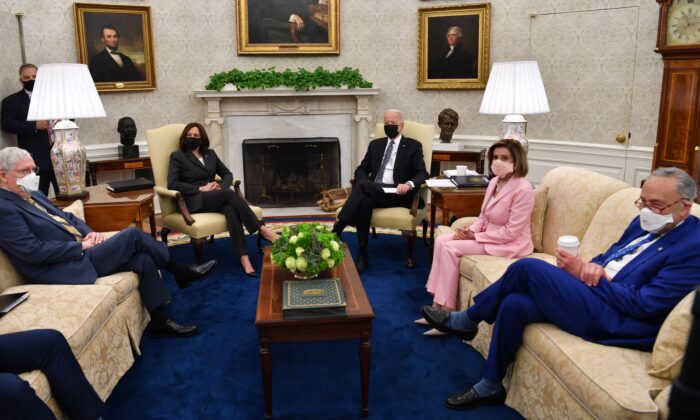 The poll asked Americans whether they approved or disapproved of the way that several federal leaders have been handling their job.

Leading the poll is Chief Justice John Roberts, a moderate George Bush-appointee who has been crucial in several major decisions handed down by the court. According to the poll, 60 percent of respondents said that they approved of Roberts’ work while only 34 percent said that they disapproved.

Sitting beneath Roberts at 53 percent approval is Federal Reserve Chairman Jerome Powell, a Trump-appointee, who was recently reinstated to lead the Fed by Biden. Dr. Anthony Fauci was also shown to have the approval of a slight majority, with 52 percent of respondents saying that they had a favorable impression of the doctor-cum-bureaucrat; 47 percent, on the other hand, said that they disapproved of Fauci.

Other figures fared substantially worse in the public eye.

Most notably, McConnell, Pelosi, and Biden respectively bottomed out the list.

Only 43 percent of respondents thought Biden was doing well, while a majority of respondents, 51 percent, disapproved of Biden. While Vice President Kamala Harris has generally seen lower approval ratings than the president, this poll showed Harris slightly ahead of Biden, at 44 percent approval. However, Harris also received a substantially higher disapproval rating at 54 percent.

By far the least popular on the list is Minority Leader Mitch McConnell. Only 34 percent of those surveyed said they approved of the longtime Republican leader. McConnell has publicly feuded with former President Donald Trump on several issues, alienating many would-be allies. On various issues, members of McConnell’s caucus have expressed disagreement with their leader’s decisions, as happened during the debate over the debt ceiling earlier in the year.

For Republicans, their Senate leader taking the bottom spot is little cause for concern: The merits and demerits of McConnell have been debated among the GOP party faithful almost as long as McConnell has been in power. As the incumbent in deep-red Kentucky, low public opinion does little to challenge McConnell or the GOP’s prospects.

But for Democrats, who have tried to put on a facade of unity amid deepening divisions between the moderate and progressive wings of their party, these numbers are more foreboding.

Over the past months of several crises, inflation, rising fuel prices, and supply chain issues have become the foremost concerns for many Americans. Democrats, once it became clear that these crises would not abate on their own, had for months marketed the $1.85 trillion Build Back Better Act as a panacea to these many woes.

Now that that bill has become effectively dead due to Sen. Joe Manchin’s (D-W. Va.) refusal to vote for the package, and with no end in sight to any of the ongoing crises as the nation moves into midterm season, Democrats are in a tough position electorally.

While many Democrats were happy to align themselves to Biden in the 2020 election, these and other polling numbers show that, in many races, Biden may do more harm than good. Some Democrats have already seen the writing on the wall, and over the past several months, many moderate or vulnerable Democrats have broken with the president over a variety of issues.