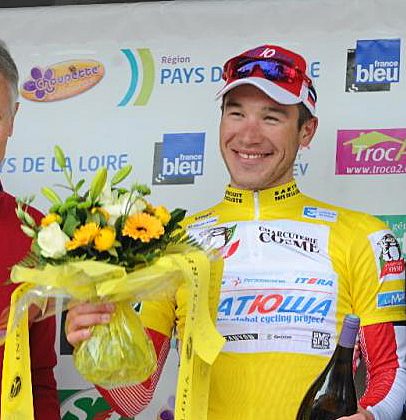 Stage One of the 2012 Circuit Cycliste Sarthe—Pays de la Loire, 192.8 km from Saint Gilles Croix de Vie to Riaille, ended in a bunch sprint after the last surviving escapee, Katusha’s Mikhail Ignatyev, was caught in the final few hundred meters.

The Katusha rider led a three-rider break from nine kilometers into the race, over three categorized climbs and all the way to the finish line while his two companions, Arnaud Courteille (FDJ BigMat) and Benoit Jarrier (Veranda Rideau U) were caught 12 km from the finish.

Ignatyev pressed on and very nearly made it, but at least he got to see a teammate win: Denis Galimzyanov won the sprint and the leader’s jersey for the first stage of this five-stage race.

“Today we did great team work,” Galimzyanov told velonation.com. “We had Ignatyev ahead all day long, but when we saw that the group would catch him, we went ahead to impose our pace and find a good position for the final massive sprint.”

Galimzyanov got a good lead-out from Maxim Belkov and Pavel Brutt, who he made sure to thank. “All my teammates worked well, especially Brutt and Belkov, so I have to thank them for my victory.

“In the last 200 meters I saw Haedo start his rush, so I followed and passed him: then, nobody could reach me and I took a good win. I’m happy about that, because the last straight was a little uphill, so it wasn’t an easy sprint: moreover, I’m not 100% because I’m still recovering from the physical troubles I had in March.”

Ignatyev, Courteille and Kévin Denis (Veranda Rideau U) got away early. Denis couldn’t keep the pace, so teammate Jarrier bridged across 16 km into the stage. (Veranda Rideau U is a local team, so they really wanted to have a strong showing here.) The three were allowed a ten-minute gap before Cofidis and Europcar decided to shut things down.

The route ended with three 12.5-km laps around the city of Riaille; Courteille and Jarrier were caught entering the final lap, but Ignatyev persisted. Had the race been 500 meters shorter it would have been his; as it was he finished 54th and had to settle for a team victory.

Denis Galimzyanov wears the yellow jersey, while Benoit Jarrier lies second, two seconds down, because he won all the intermediate sprint points. Colnago’s Sacha Modolo is third at four seconds, and Ignatyev lies fourth at four seconds because of bonuses collected on the road.

Stage two is quite short: 87.8 kilometers from Riaille to Angers, with a single climb right in the middle. This will most likely lead to another sprint finish.