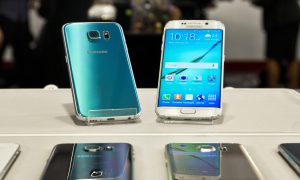 Galaxy S6 Vs iPhone: Who Has Conquered the Market?

How well is the Galaxy S6 selling for Samsung? Pretty well… but nowhere near as well as Apple's iPhone 6
By Brad Reed
biggersmaller
Print

How well is the Galaxy S6 selling for Samsung? Pretty well… but nowhere near as well as Apple’s iPhone 6. Counterpoint Research released new data on Tuesday suggesting that while the Galaxy S6 and S6 edge were together outselling last year’s Galaxy S5, they still trailed both the iPhone 6 and iPhone 6 Plus in monthly sales in April 2015… despite the fact that Apple’s newest iPhones had been out for more than six months at that point.

IN CASE YOU MISSED IT: Why the iPhone 6s is poised to blow away all previous iPhone sales records

There’s some encouraging news here for Samsung, however: Its Galaxy S6 edge proved to be a much bigger hit than anyone expected and Samsung’s device sales would have been higher if it had been able to produce enough S6 edge models to meet demand.

In fact, Counterpoint says that the Galaxy S6 only sold “slightly” more than the S6 edge in April, despite the fact that Samsung had been expecting to sell significantly more Galaxy S6 units than Galaxy S6 edge units.

How Much Will It Cost to Replace Your Galaxy S6 Battery?

“We believe the Galaxy S6 Edge could have sold more if there weren’t supply issues, but it is on track to become more popular than the standard version as Samsung’s marketing engine kicks-in at full-speed,” says Counterpoint research director Neil Shah. “The curved glass is certainly going to be a challenge for production as it is the first of its kind and navigating unchartered waters, so managing the supply with shifts in demand between the two models will be the key to maintaining momentum.”

In all, Counterpoint expects Samsung’s flagship devices to hit sales of 50 million units by the end of the year.