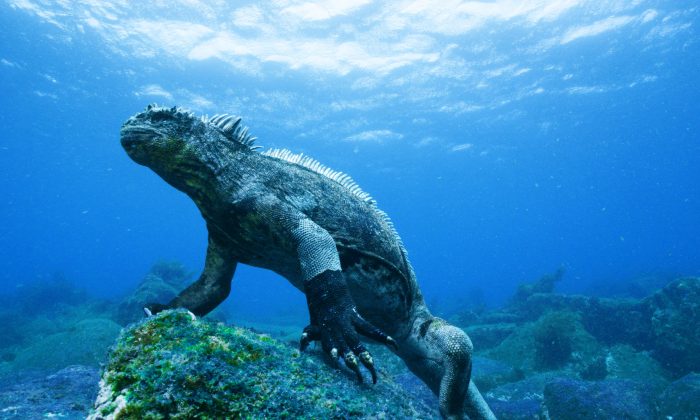 A marine iguana stands on a rock covered in green algae in a still from “Galapagos 3D.” (Colossus Productions/nWave Pictures)
Canadian Content

Film Review: ‘Galapagos 3D’, a Unique World Within Our World

Written by David Attenborough and narrated by Jeff Corwin, the IMAX film Galapagos 3D is a fascinating close-up of the natural museum of life that inhabits this World Heritage Site in the Pacific Ocean.

The Galapagos Islands form an archipelago composed of 13 islands and many smaller islets that are outcroppings of lava rock formed over millennia. Situated on the equator, they belong to Ecuador and lie 1,000 km west of South America.

According to the film, these isolated islands provide a varied habitat that has resulted in the formation of more unique species of animals and plants than anywhere else in the world.

The camera zooms in on the diversity of life and shows how the singular inhabitants of the islands and nearby ocean have adapted to the harsh environment of the archipelago.

Formed from centuries of volcanic magma gushes from a string of active volcanoes, the islands display varying stages of evolution. They are positioned above huge tectonic plates whose activity causes the islands to gradually move from their site of origin to the east. This means that the youngest islands are at the west end of the archipelago where the volcanoes are located.

It is the middle-aged islands that are lush with trees, bushes, and tall grasses. Here are found some of the giant Galapagos tortoises after which the islands are named.

Spanish sailors discovered the islands in 1535. Galapagos means saddle in Spanish and refers to the shape of the shell found on one kind of giant tortoise. These tortoises’ shells are curved in the area above the head to allow them to stretch out their necks and eat taller plants. Other tortoises have a regular domed shell and feed on ground-level plants.

Regardless of the shape of their shells, the tortoises are huge and can weigh up to 300 kg.

Several types of Galapagos iguanas are introduced, including a rare marine iguana that swims deep in the ocean to feed on algae and seaweed. The marine lizards have developed a gland in the nose that excretes excess salt accumulated while swimming and feeding underwater. A good sneeze is all it takes

Centuries ago, Antarctic penguins travelled thousands of kilometres to find a home on the islands. The Galapagos penguins are half the size of their predecessors, which allows their smaller bodies to cool down faster when they hop in the ocean in search of colder currents. Although they have adapted to the hot climate, on land they tend to seek what little shade is available.

Another bird that evolved after arriving on the islands is the Galapagos cormorant. It is now larger and heavier than other cormorants and its wings are stubby, unusable appendages. Thus, these cormorants no longer fly and they catch fish by diving from the ocean surface.

There are many other kinds of birds including the blue-footed boobie, the albatross, and several types of herons. Some are seen dancing, which is part of the male birds’ mating ritual to impress a potential mate.

With a dearth of predators on the islands, the wildlife is remarkably unafraid of humans and their cameras, which means the shots show the animals and birds up close and in their natural state.

Access to the islands is strictly controlled to protect the natural habitat and visitors must be accompanied by a national park-certified naturalist tour guide.

It is worth noting that the IMAX technology was invented in Canada. It uses a curved screen that is many times larger than a normal theatre screen and has a 70-degree viewing area (a normal screen is 54 degrees). The clear images and crisp soundtrack immerse the viewer in a world that feeds all of the senses.

The use of 3D enhances the immersive quality of Galapagos 3D, as giant tortoises look you right in the eye and insects seems to fly in front of your nose.

Galapagos 3D is currently playing at IMAX theatres across Canada.