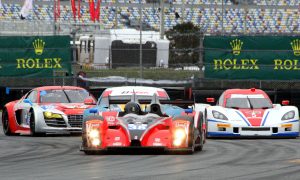 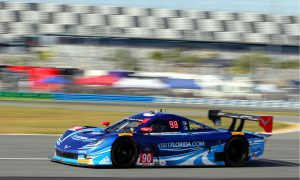 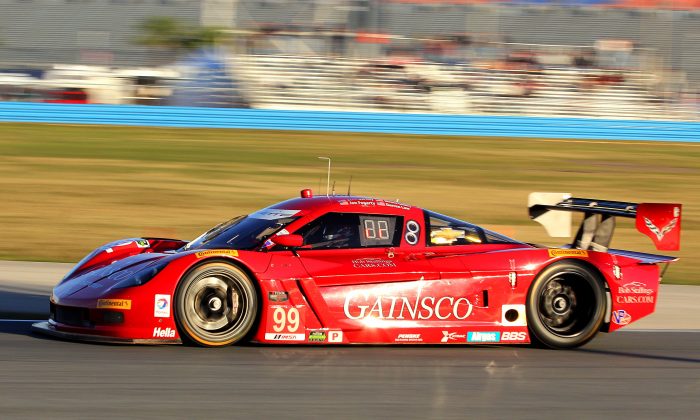 Only 0.217 behind was the #90 Spirit of Daytona Racing Coyote-Corvette driven by Richard Westbrook. Only eight-thousandths behind Westbrook was Scott Mayer in the #78 Starworks Riley-Dinan.

The only non-DP to crack the top ten was the DeltaWing DWC13, which is essentially a P1 car running as a P2; the DeltaWing was a second slower than the fastest car.

The quickest P2 car, the #6 Muscle Milk Pickett Racing Oreca-03-Nissan, qualified 11th, 1.6 seconds off the pace. Obviously TUSC has made a mess of the Balance of Performance between the two types of car in the Prototype class.

[UPDATE: Three cars failed tech inspection and will start from the back of the grid:

[Further Update: The #48 car has been reinstated as GTD pole-sitter.]

The SRT Racing Viper GTS-Rs qualified first and third in the GTLM class, split by the Porsche North America 911. One Corvette qualified fourth, while the other missed the session with electrical issues.

GTLM has always been a very competitive class, and still is; 0.24 seconds cover the top five cars.

Unsurprisingly, Colin Braun in the #54 Core Oreca, quickest in both practice sessions, qualified best in LMPC, followed by 0.038 seconds by Renger van der Zande in the #8 Starworks Oreca. Bruno Junqueira was third in the #09 RocketSports Racing car, 0.111 seconds off Braun’s pace.

GTD, with 29 entries, promised to be a hotly contested class, and it was. Two Audis sandwiched a Ferrari, with another Ferrari and an Aston rounding out the top five. Christopher Haase in the #48 Paul Miller Racing Audi R8 LMS took the class pole with a lap of 1:46.973.

Night practice starts at 6:30 p.m. The TUSC cars practice again Friday in the morning, while in the afternoon the Continental Tire Sports Car Challenge series kicks off its season with the BMW Performance Challenge 200.

The Tudor United Sports Car Series 52nd Rolex 24 at Daytona takes the green flag at 2:10 p.m. Saturday, Jan 25. Visit IMSA.com for more information about the race and for Live Timing and Scoring for every track session.

Tickets are available at the box office or through the Daytona International Speedway web site.