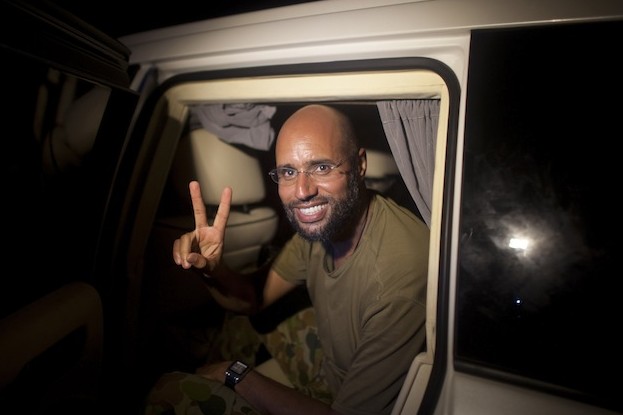 Saif al-Islam Kadhafi, son of former Libyan leader Moammar Gadhafi, flashes the V-sign for victory as he appears in front of supporters and journalists in the Libyan capital Tripoli in the early hours of August 23, 2011. (Dario Lopez-Mills/AFP/Getty Images)
Africa

The son of ex-Libyan leader Moammar Gadhafi refused to appoint a lawyer in his defense, it was reported.

Saif al-Islam Gadhafi is accused of murder and torture during the crackdown against a popular uprising against his father’s longtime rule.

Libyan Deputy U.N. Ambassador Ibrahim Dabbashi said, “This matter has mainly got to do with Saif al-Islam Gadhafi, who until now refuses appointing an attorney to defend him,” he was quoted as saying by Reuters. “Hence the matter is not in the hands of the Libyan authorities but rather the defendant himself, but there are no obstacles toward hiring an attorney to defend him.”

Saif al-Islam is being held in the city of Zintan by the military council, under the National Transitional Council of Libya.

Human rights groups are concerned that Gadhafi has not had contact with a lawyer or legal team.

The International Criminal Court (ICC) has told Libyan authorities they should hand him over for crimes against humanity.

The ICC confirmed on Wednesday that Libyan authorities want to try Gadhafi in Libya, and the ICC is considering this request.