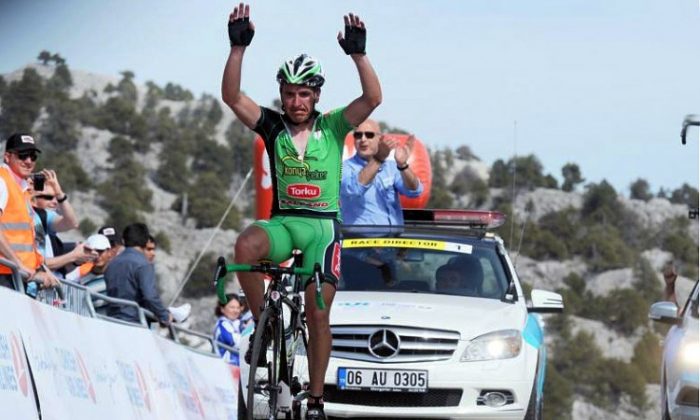 Ivailo Gabrovski rides away from the pack early in the climb, gaining a gap no one could cross. TourofTurkey.org
Cycling

Bulgarian champion Ivailo Gabrovski riding for Turkish Continental team Konya Torku Seker Spor earned a the first win for a Turkish team in the 48-year history of the Presidential Tour of Turkey.

Gabrovski attacked eight kilometers form the end of the final Cat 1 climb of the mountainous Stage Three, opening a gap of over a minute as none of the riders from the bigger teams had any response.

Gabrovski attacked halfway up the final climb, when the grade was about eight percent, knowing that the real climbers would be saving their legs for the steepest sections at the end. His gamble paid off—none of the big-name climbers could close the gap when the gradient topped ten percent or more near the end.

The peloton allowed this group a five-minute gap over the day’s second climb, another Cat 1 ascent halfway through the stage, then reeled in the break on the lumpy plateaus before the final climb. Colnago and Omega Pharma-Lotto led the chase; the peloton caught the escapees 16 km from the finish, when the road first started to angle up to the mountaintop finish.

The climbers took it easy for the first five kilometers of the climb; with one km to go, when the grade hit eight percent, Astana picked up the pace, with riders from Andalucia and Colombia Coldeportes in line.

Romain Hardy of Bretagne-Schuller was the first rider to attack, but he was shut down quickly. Katusha’s Vladimir Isaichev and United HealthCare’s Phillip Deignan moved to the front, eyeing each other, when Ivailo Gabrovski exploded out of the peloton and simply rode away. No one marked him, possibly because no one recognized the jersey as a serious ProTour team, Konya Torku is a Continental team, one rank below the elite ProTour squads.

Gabrovski, who won a stage in the Tour of Turkey in 2007 when it was a much smaller race, knew his way up the mountain; he knew he could get enough of a cushion on the lower slopes to keep him ahead if he burned out near the end. In fact, he never slowed his pace until the final 500 meters; the Bulgarian rider from the Turkish team turned in the ride of his career to take the stage win and the overall lead.