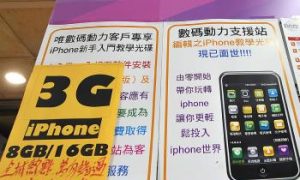 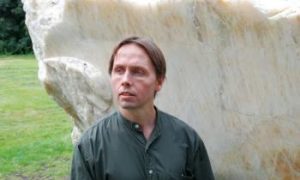 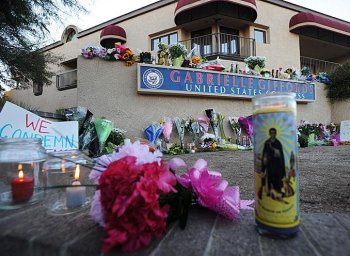 Gabrielle Giffords Alive: People leave flowers and candles outside the Tucson office of U.S. Rep. Gabrielle Giffords (D-AZ), who was shot during an event in front of a Safeway grocery store January 8, 2011 in Tuscon, Arizona. (Laura Segall/Getty Images)
US

"I'm about as optimistic as I can get in this situation," said Dr. Peter Rhee, medical director of the UMC Trauma Center at the University of Arizona, in a televised press conference. She had been shot through the head, he said.

Giffords's new intern, Daniel Hernandez, may have saved her life by quickly applying pressure to the wound, reported The Arizona Republic.

The gunman, now suspected to be Jared Loughner, 22, of Tucson, killed 6 people and injured 13 others.

Gabrielle Giffords, a U.S. Congresswoman, was shot at a grocery store in Tucson, Ariz., today, along with possibly as many as 11 other people.

According to an eyewitness report from CNN, the shooting at a grocery store in Tucson injured several people, possibly as many as 12. At least one injured person was sent to Northwest Medical Center. Other victims were sent to University Medical Center.

Speaking of Gabrielle Giffords (D-AZ), spokeswoman for the University Medical Center, Darci Slaten, told Reuters: "She is currently in surgery. She's alive." Slaten also told CNN that Giffords had been shot in the head.

In an interview with CNN, Jason Pekeau, an employee at Sprint store near the Safeway grocery store where the shooting occurred, said he heard gunshots and went outside to see what was happening.

“I heard about 15-20 gunshots,” said Pekeau, who did not witness the shooting but took photos of the crime scene, which were televised by CNN.

Pekeau added that he saw "two bodies laying on the sidewalk in front of the Safeway.” He did not indicate whether the individuals were dead or alive.

“Everyone was screaming that it was [Congresswoman] Gabrielle Giffords [who was shot],” Pekeau told CNN.

Congresswoman Giffords, according to her website, was scheduled to make a public appearance at the Tucson-area Safeway today between 10:00 a.m. -11:30 a.m. local time.

The scheduled event was for a “Congress on Your Corner” meeting to give Arizona residents from Giffords's district a chance to meet with Giffords one-on-one and discuss any issues, concerns, or problems involving the federal government, according to her website.

The Pima County Sheriff's Department refused to confirm the shooting when contacted by The Epoch Times and did not issue a press statement at the time of publication.