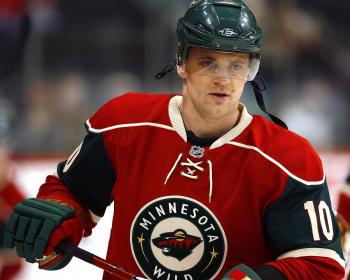 He leads the league in goals with 21 and is among the league leaders with 37 points in 25 games. In his career, Gaborik has played 527 games, popped in 240 goals and set up 234 for 474 regular season points.

However, when you factor in how many games per season he has actually played, you might pause.

Not including this season, Gaborik has played in an average of only 63 games per season. He has only played in more than 80 games once in his career. His career has been plagued by various injuries, including ones to his groin and hip. He even a held out for more money.

The right-winger only played in 17 games with the Minnesota Wild last season due to a hip injury and subsequent surgery, but still managed to net 13 goals and 10 assists.

The Rangers No. 10 was certainly highly regarded coming into the NHL.

The Wild selected Gaborik third-overall in the 2000 draft, after the NY Islanders first-overall pick of Rick DiPietro and the Atlanta Thrashers selection of Dany Heatley.

Unfortunately for the former first-rounder, defensive-minded coach Jacques Lemaire was behind the bench for the first eight seasons of Gaborik’s career. Lemaire’s trap-oriented system put a muzzle on the winger’s offensive skills.

Gaborik still showed flashes of brilliance with Minnesota; averaging 54.6 points a season in eight seasons and put up a career-high 83 points in 2007–08.

He even popped in five goals in a 6–3 victory on Dec. 20, 2007, ironically enough against the New York Rangers.

When the free agency period opened last July, the right-winger signed a five-year deal with the Rangers that paid $7.5 million a year.

Although the Broadway Blueshirts are known to spend their money liberally, GM Glen Sather and the team’s brass did their due diligence, even talking with the doctors who performed Gaborik’s hip surgery and they gave the former Wild player the thumbs up.

Gaborik was just what the Rangers were seeking Sather told the Canadian Press upon the signing.

“Gaborik played under [Lemaire’s defensive system] and he's got almost a point a game,” said Sather.

“He's been very productive, so it's going to be very interesting to watch to see how he does with [head coach John Tortorella's] system.”

“As Torts has described, we're going to have a very up-tempo, speed game. This guy fits the bill to a T,” Sather went on to say.

After years of being cooped up under Lemaire, Tortorella’s free-flowing ways were a breath of fresh air for the former Wild top pick.

“It's a different system, definitely,” Gaborik told Sun Media when asked about coach Tortorella’s system back in November.

“I still have to do my things defensively, but it's a different system, it's more of an attacking system with more skating.”

“Things are good, it's totally different than Minnesota. I'm really enjoying the team, the organization, and the city,” he went on to say.

And while many blame Lemaire for hindering Gaborik’s offensive numbers, the current New Jersey coach did aid in the winger’s development in one way.

The Slovakian winger’s play in his own end of the rink has been very good throughout his career with a +/- rating of +62 through his eight seasons in the league—he currently has a rating of +8.