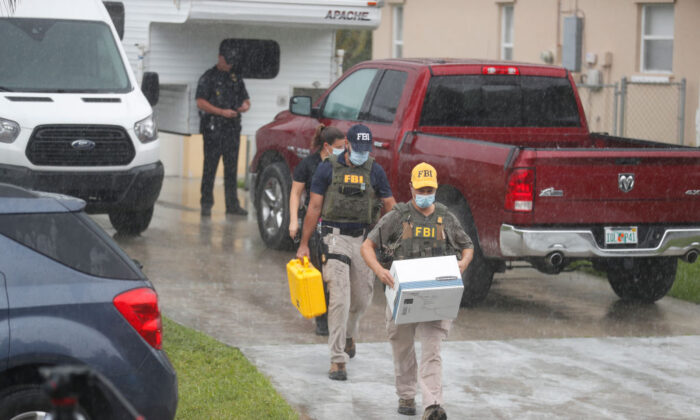 FBI agents begin to take away evidence from the family home of Brian Laundrie, who is a person of interest after his fiancé Gabby Petito went missing in North Port, Fla., on Sept. 20, 2021. (Octavio Jones/Getty Images)
Florida

The parents of Gabby Petito, the young woman killed by her fiancé, Brian Laundrie, have amended their lawsuit against Brian’s parents by accusing the Laundrie family of going on a vacation with knowledge of the location of Petito’s body.

Laundrie and his parents “went on vacation knowing that Brian Laundrie had murdered Gabrielle Petito, it is believed that they knew where her body was located, and further knew that Gabrielle Petito’s parents were attempting to locate her,” the amended lawsuit states, according to NBC.

Christopher and Roberta Laundrie, Brian Laundrie’s parents, have denied any knowledge related to Petito’s death, where her remains were, or that they helped their son flee when he was being sought after by law enforcement as a person of interest.

Roberta Laundrie made a camping reservation at Fort De Soto Park for the first weekend of September. However, the reservation was changed on Sept. 3 to the weekend of Sept. 6 to 8 and an extra person was added to the list. The change in reservation came just two days after Brian returned home after his trip with Petito on Sept. 1.

On Sept. 17, the Laundries told police officers that they hadn’t seen their son since the 14th of the month. On Sept. 19, Petito’s body was discovered at the Wyoming national park. A coroner ruled that the 22-year-old woman had died by strangulation.

On Oct. 20, Brian’s body was found at Florida’s Carlton Reserve together with a notebook nearby in which he confesses to being responsible for Petito’s death. Brian’s death was ruled a suicide.

The Petito family eventually filed a lawsuit contending that Brian confessed about the murder to his parents and that Roberta and Christopher concealed this fact from investigators.

“In doing so, Christopher Laundrie and Roberta Laundrie acted with malice or great indifference to the rights of (Gabby’s parents) Joseph Petito and Nicole Schmidt,” the lawsuit claims, adding that such conduct is “shocking, atrocious, and utterly intolerable in a civilized community.”

The Laundrie family is also accused of attempting to arrange for Brian’s escape from the country, though no evidence was provided to back up such a claim. Petito’s family is seeking damages of at least $30,000.

Steven Bertolino, attorney for the Laundrie family, said in an interview with CNN that he is confident that the court will side with his clients in the lawsuit.

“The allegations in the amended complaint may now conform to proper pleadings but they do not give rise to liability under the law. Thus, we are still confident the Court will dismiss the action,” Bertolino said.