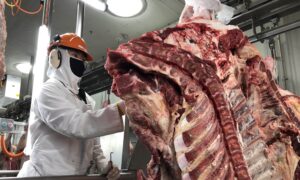 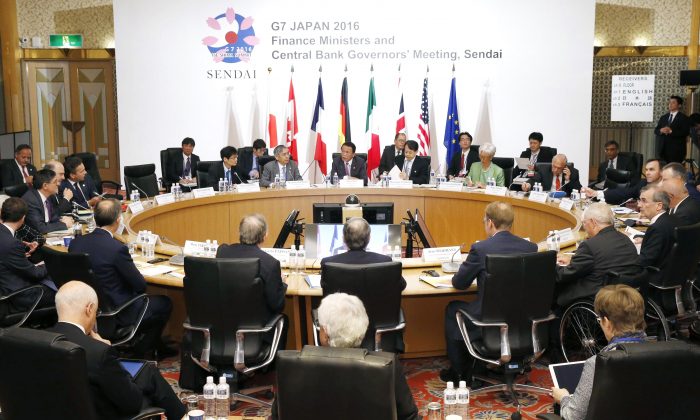 Japanese Finance Minister Taro Aso, center back, presides over a meeting of finance ministers and heads of central banks of the Group of Seven in in Sendai, northern Japan, Friday, May 20, 2016. (Yohei Kanezashi/Kyodo News via AP)
International

AKIU, Japan—The Group of Seven major economies showed a united front on fighting terrorist financing and tax evasion in talks that ended Saturday, but shied away from coordinated action on policies to revive stalling growth.

An “action plan” issued after the talks by G7 finance ministers and central bank governors at a hot springs hotel in northern Japan called for increased exchanges of information on financial intelligence, reducing the level of cross-border transactions subject to disclosure and collaborating on targeted sanctions for terrorists’ financial networks, including freezing assets.

“There’s a moment for reflecting, for putting forward ideas, for comparing them, and then comes the moment for action. This is where we are today,” said France’s finance minister, Michel Sapin, whose country has suffered devastating attacks in the past few years.

The talks in Akiu, to be followed by a G7 summit in central Japan’s Ise region next week, started out with a brainstorming session on how best to use monetary policy, government spending and longer-term reforms to help support growth.

But they ended with countries stressing the need for varying strategies for boosting growth.

Most of the governments of the G7 favor more pro-active government spending to help support flagging growth and spur demand, while Germany has remained more conservative on fiscal matters, regarding structural reforms as crucial.

U.S. Treasury Secretary Jacob Lew said the lack of coordinated action, in the absence of a crisis, was natural, given the varying conditions and resources in each country.

“We each have unique challenges that have to be addressed, so it’s not one-size-fits-all,” Lew said. “Different times require different responses. We’re not in 2008 or 2009.”

Lew did express concern, however, over Japan’s plan to raise its sales tax, to 10 percent from the current 8 percent, in April 2017.

“Each of us needs to take policy actions that given the conditions in our country are most likely to produce more demand and more growth,” Lew said, adding that while the decision is up to Japan, “We’d be quite concerned about taking steps that would put a drag on the economy.”

Aso, who has said the tax hike will go ahead unless there is a major crisis or disaster, also acknowledged differences with the U.S. over such issues as exchange rates.

“I met with Secretary Lew and we didn’t have a heated discussion. We had a normal conversation,” Aso said. “We have to say what we think to each other because that’s our jobs. It’s normal to exchange views and that helps ensure things will not go awry because issues become too emotional.”

Lew stressed that he hoped G7 members would honor commitments made during recent discussions in China by the wider Group of 20 major economies, where members pledged to not manipulate exchange rates to their own advantage.

A recent rise in the value of the Japanese yen against the U.S. dollar is adding to pressures on Japanese companies who had reaped record profits as the yen weakened in recent years, fattening earnings brought back to Japan in yen terms. While reiterating a pledge not to engage in “competitive devaluations,” Aso has chafed at recent moves in the yen’s value, hinting at the possibility of intervention if they become too “disorderly.”

“Instability and disorderly movements can have … implications for financial stability,” he said.

The talks also touched on nonfinancial risks to growth, such as the refugee crisis, terrorism and a looming referendum in Britain over whether or not to leave the European Union. Such a move is viewed as likely to cause major disruptions both in Europe and in global financial markets.

The World Bank, whose president, Jim Yong Kim, is attending the talks, took the opportunity to launch a financing mechanism for insuring risks from pandemics. Japan pledged the first $50 million to fund the $500 million initiative.

The talks also explored ways to improve the “integrity” of global financial flows, especially following the release of the so-called “Panama Papers,” which disclosed details of offshore companies set up for wealthy individuals and companies by the Panama-based law firm Mossack Fonseca. Companies registered in tax havens are often used for legitimate business purposes, but also can facilitate tax evasion and money laundering.

“In a positive sense, the Panama Papers have acted as a sort of tail wind” for efforts to crack down on tax avoidance, Aso said.

Sapin, the French finance minister, said the group also made progress on how to help Greece resolve its dire troubles over its debt, most of which is owed to European creditors.

“Until everything is decided, we can’t consider it done, but I think all the elements for an agreement are today on the table,” Sapin said. “The observation we can make is that Greece is keeping its obligations.”

Apart from Japan and the U.S., the G7 countries include Britain, Canada, France, Germany and Italy.