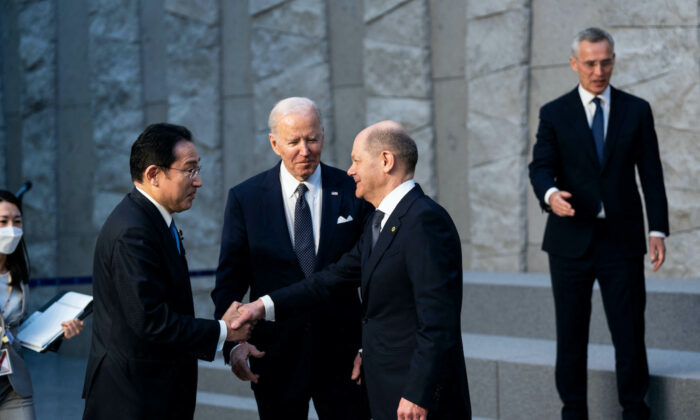 The Chinese regime is expected to be a key issue in the upcoming G-7 and NATO summits a senior U.S. official said on Wednesday.

“Ukraine is not causing us to take our eye off the ball on China. In fact, I think quite the opposite,” said an unnamed senior U.S.administration official in Washington in a background press call previewing the two summits.

NATO is set to put a focus on the Chinese regime for the first time when leaders sign off a new “strategic concept,” according to the official.

Strategic concept is second in importance only to the alliance’s founding charter. It will chart out the pathway that NATO will take strategically over the next decade. The previous version published in 2010 didn’t make note of China and even listed Russia as a strategic partner of the alliance.

“Russia obviously continues to be the most serious and immediate threat to the Alliance. But the Strategic Concept will also address the multifaceted and longer-term challenges posed by the PRC to the Euro-Atlantic Security,” said the senior official, using the acronym of China’s official name, the People’s Republic of China.

Reflecting its new focus, leaders from Asia-Pacific regions, including Australia, Japan, New Zealand, and South Korea, will participate in the summit for the first time, the official said.

U.S. President Joe Biden will head to Madrid for the NATO summit on June 29-30 after conferring with other G-7 leaders in southern Germany.

The G-7 leaders will meet on June 26-28 at Schloss Elmau in the Bavarian Alps. Their meetings will include addressing the Chinese regime’s “coercive economic practices”, according to the U.S. official.

“Last year marked an important watershed with respect to the G-7 speaking for the first time to China’s unfair, China’s coercive economic practices,” the official said.

“We expect that that is going to be, if anything, a bigger topic of conversation this time around, recognizing the extent to which those practices have become even more aggressive and more prominent in terms of the world economy and the globe’s experience of it.”

In 2021, leaders of the G-7—the United States, Canada, Britain, Germany, Italy, France, and Japan—vowed to counter the Chinese regime’s unfair trade practices while condemning its human rights abuses in the far-western Xinjiang region.

At last year’s G-7 meeting in England, Biden announced that leaders agreed to propose infrastructure projects in the developing world that would counter Beijing’s “Belt and Road” Initiative.

The Belt and Road project has been criticized as a form of “debt trap” diplomacy that saddles developing nations with unsustainable debt levels while bolstering Beijing’s political and economic clout in those countries.

Andrew Thornebrooke And Cathy He contributed to the report.