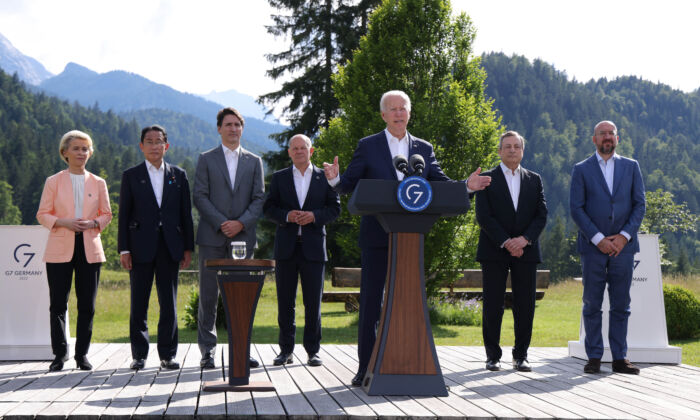 Leaders from the Group of Seven (G-7) representing the world’s wealthiest democracies announced on June 26 that $600 billion would be allocated for global infrastructure programs to counter the Chinese regime’s expansion through its financing of enormous loans to poor countries for building infrastructure.

U.S. President Joe Biden and other G-7 leaders pledged to raise $600 billion by 2027 for the plan, known as the Partnership for Global Infrastructure and Investment, aimed at supporting the infrastructure needs of low- and middle-income countries.

“I want to be clear, this isn’t aid or charity,” Biden said as he unveiled the project following the meeting at the beginning of the three-day summit in Germany. “It’s an investment that will deliver returns for everyone, including the American people and the people of all our nations.”

The United States will mobilize $200 billion for the partnership over the next five years “through grants, federal financing, and leveraging private sector investments,” according to the White House.

Europe has announced that it will mobilize 300 billion euros over the same period.

“This will only be the beginning,” the White House said in a separate statement. “The United States and its G7 partners will seek to mobilize additional capital from other like-minded partners, multilateral development banks, development finance institutions, sovereign wealth funds, and more.”

The infrastructure plan is seen as a rebranding of the Build Back Better World initiative, also known as B3W, which was first unveiled at last year’s G-7 summit in the UK as a response to the Chinese regime’s multitrillion-dollar Belt and Road (BRI) project.

Launched by Chinese leader Xi Jinping in 2013, the BRI reached its peak in expanding the regime’s influence in 2015 through global trade links and building railways, ports, highways, and other infrastructure projects. More than 140 countries have joined the initiative, with mixed results.

Critics of the BRI have dubbed the project a form of “debt-trap diplomacy,” which saddles developing nations with unsustainable debt levels, leaving them vulnerable to ceding strategic infrastructure and resources to Beijing. In September, research lab AidData counted at least 42 countries with public debt exposure to China exceeding a tenth of their gross domestic product.

“It is up to us to give a positive and powerful investment impulse to the world to show our partners in the developing world that they have a choice,” European Commission President Ursula von der Leyen said at the June 26 press conference.

“When democracies demonstrate what we can do, all that we have to offer, I have no doubt they will win the competition every time,” he said.

Reuters and Eva Fu contributed to the report.