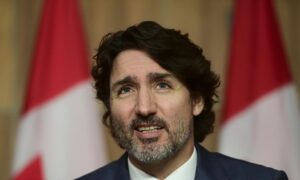 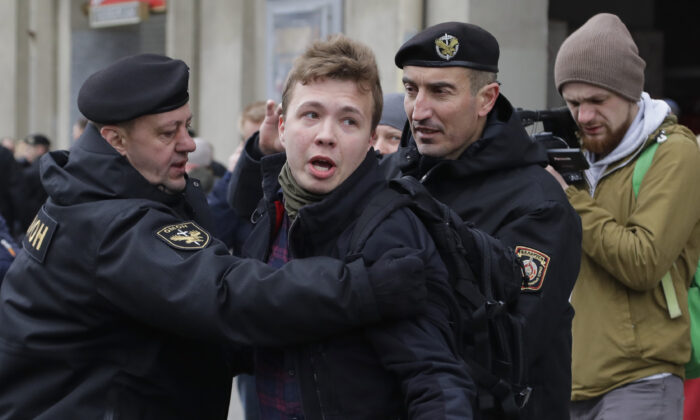 OTTAWA—The G7 says it will ramp up its efforts to hold Belarus accountable for arresting a dissident journalist on board an intercepted jetliner, though additional penalties have yet to be nailed down.

In a statement Thursday, the countries’ foreign ministers along with a European Union representative said they will impose “further sanctions as appropriate,” condemning the act as an attack on press freedom and civil aviation rules.

The EU has already moved to ban Belarusian airlines from its skies, advised EU carriers to steer clear of flights over Belarus and pledged further economic sanctions.

On Sunday, Belarusian air traffic controllers diverted a Ryanair flight between Greece and Lithuania to Belarus’s capital, Minsk, claiming there was a bomb threat.

On the ground, authorities detained journalist Roman Protasevich and his girlfriend Sofia Sapega, who both later appeared in videos under apparent duress.

The G7 is calling for immediate action from the International Civil Aviation Organization council, which convened an urgent meeting Thursday morning.

Transport Canada urged Belarus to release all individuals who have been arbitrarily detained and called on it to co−operate with the council’s investigation.

“Canada remains deeply concerned by the ongoing crackdown against journalists and peaceful protesters by the Belarusian government,” the department said in an email Thursday.

Transport Canada said Tuesday it had issued an “airspace security warning … in response to unusual excessive measures by Belarus,” advising airlines against flying over the country.

The same day, the Belarusian Embassy in Ottawa announced it will shut its doors, stating in a website post that activity will be suspended as of Sept. 1. The statement made no reference to international outrage over Sunday’s incident.

Canada announced sanctions against 55 Belarusian officials last year after an election that Global Affairs Canada said was “marred by widespread irregularities” amid a “systemic campaign of repression” and human rights violations under President Alexander Lukashenko, who has served in the office since its creation in 1994.

He was sworn in for a sixth term after a landslide election victory last August that sparked countrywide protests and global backlash over a vote that was widely seen as fraudulent.

Protasevich, 26, is part of a disparate group of Belarusian journalists and activists campaigning in exile against the president’s 27-year reign.

He co-founded the Telegram channel Nexta, which has helped rally anti-Lukashenko demonstrations, landing him on a wanted list for terrorism in 2019. The state charged Protasevich in absentia last year with “organizing mass riots and group actions that grossly violate public order.”

He was travelling on Ryanair Flight 4978 from Athens to Vilnius, Lithuania, on Sunday afternoon when air traffic control, assisted by a Belarusian fighter jet, prompted the plane to turn around and make an emergency landing at the Minsk airport.