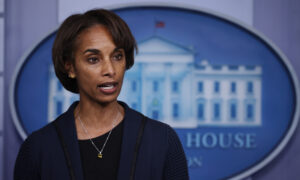 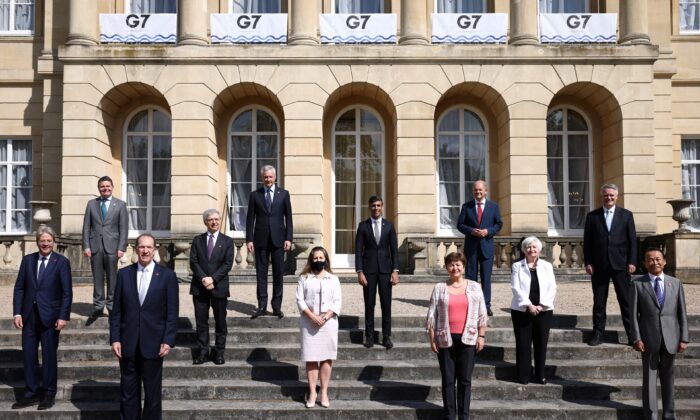 Finance ministers pose for a "family photo" during the G-7 meeting at Lancaster House in London, on June 5, 2021. (Henry Nicholls /Reuters)
Economies

The world’s leading industrial nations reached an accord on June 5 to set a global minimum tax rate, in an effort to discourage multinational corporations from shifting profits to low-tax countries. While the accord is a significant breakthrough for those seeking international agreement on corporate taxes, there’s more work ahead.

The Group of Seven (G-7) nations agreed to “commit to a global minimum tax of at least 15 percent on a country by country basis,” according to a communique from G-7 finance ministers. The group is hoping to reach a similar agreement at the Group of 20 meetings next month, which may lead to a broader deal for the Organization for Economic Cooperation and Development (OECD) this year.

For years, the OECD has been coordinating talks among 140 countries on cross-border tax reform and aims to reach a conclusion soon.

“This agreement is subject to further agreements, there’s a lot of work still to be done to ensure that the policy works well,” Daniel Bunn, vice president of global projects at the Tax Foundation, told the Epoch Times.

According to Bunn, this agreement doesn’t “end the race to the bottom,” as U.S. Treasury Secretary Janet Yellen has suggested. Countries will continue to find other ways to compete on tax policies, he argued.

“It’s interesting that countries that were agreeing to this tax policy have special provisions of their own that result in tax rates below 15 percent. You have countries with ‘Patent Boxes’ like the UK that has a 10 percent rate on patent income,” he said.

“It’s going to be curious to see whether the global minimum tax will continue to let those policies exist.”

The G-7 countries—Canada, France, Germany, Italy, Japan, the United Kingdom, and the United States—reached an agreement on two pillars.

According to a proposal offered by Yellen, only the world’s 100 largest and most profitable companies would be subject to this new rule.

“It is a whole new way of doing tax policy for multinationals. And one of the reasons I think that Treasury has tried to limit this to the 100 largest companies is because it has the potential to be really, really complex,” Bunn said.

The second pillar of the G-7 agreement imposes a global minimum tax on potentially any company that has a low effective tax rate on foreign earnings. If companies pay lower rates in a particular country, their home countries could “top-up” their taxes on foreign earnings to the minimum rate, removing the benefits of shifting profits.

A worldwide minimum corporate tax rate would reduce the attractiveness of tax havens, which have increasingly become a common part of global business practice in the last three decades.

Corporate profit shifting into tax havens by U.S. multinationals has jumped from roughly 5 to 10 percent of gross profits in the 1990s to roughly 25 to 30 percent in 2019, according to a report by the International Monetary Fund.

And the use of tax havens costs governments $500 billion to $600 billion per year in lost corporate tax revenue, according to a study cited by the IMF.

Goldman Sachs estimated that a 15 percent global minimum tax rate would have a “small” impact on U.S. corporate earnings. The downside risk is just 1 to 2 percent, a report by Goldman Sachs said.

“Within the U.S. equity market, industries with low current effective tax rates and high foreign income exposure face the greatest risk,” the report said. “At the sector level, Info Tech and Health Care would face the greatest earnings risk, but even those sectors appear to face aggregate downside of less than 5 percent relative to consensus estimates.”

According to experts, the direct impact of a 15 percent global minimum tax on U.S. companies would also depend on other tax policies that would come from the U.S. Congress.

President Joe Biden proposes substantial tax increases on U.S. corporations to pay for his $2.3 trillion American Jobs Plan. His proposal imposes a 15 percent minimum tax on large corporations’ book income, along with increases to the tax rates on both domestic and foreign income.