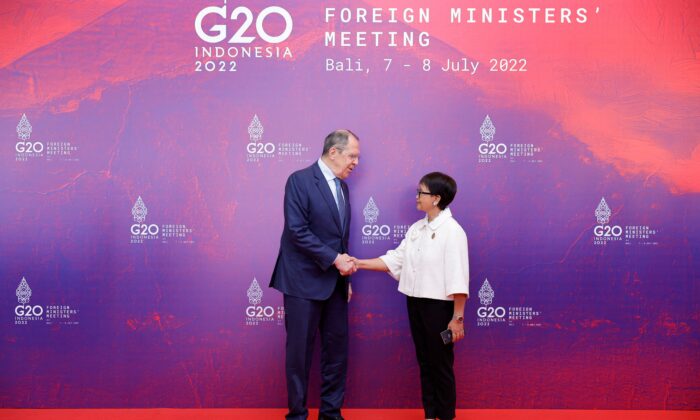 The third meeting of the G20 finance ministers and central bank governors took place on the Indonesian island of Bali on Friday, with the economic fallout of the Russia–Ukraine war being the major focus.

In her opening remarks, Indonesian Finance Minister Sri Mulyani Indrawati called on the G20, the world’s top economies, to reach a consensus to address global challenges, as she warned of a “catastrophic” crisis outcome.

“We are witnessing an alarming increase in risk to food security as the impact of the war in Ukraine and sanctions as well as export restriction[s] which are exacerbating the effect of the COVID-19 pandemic,” she said.

Indrawati said the Ukraine war and rising commodity prices threaten global microeconomic stability and economic recovery, prompting a need for G20 members to “build bridges between each other.”

“We are acutely aware that the cost of our failure to work together is more than we can afford. The humanitarian consequences for the world, and especially for many low-income countries, would be catastrophic,” she said.

Her remarks follow Indonesian President Joko Widodo’s visit to Ukraine and Russia last month, during which he offered to become the countries’ “communication bridge” to resolve the global food supply chain disruptions.

Officials from the United States, Britain, Canada, and Ukraine walked out of a session at the previous G20 finance summit in Washington to protest the attendance of Russian officials. The April meeting concluded without a joint communique.

Speaking at a press conference on Thursday, Yellen said “we are seeing negative spillover effects” from the Russia–Ukraine war “in every corner of the world,” particularly in terms of higher energy prices and rising food insecurity.

“Throughout my trip to the region, and here in Indonesia, we will also continue our conversations about what we can do together to help others around the world impacted by Russia’s war,” she said.

“This includes addressing food insecurity, and the design and implementation of a price cap on Russian oil.”

Yellen said the price cap on Russian oil had not yet been decided but that they would choose “a number that clearly gives Russia incentive to continue to produce, that would make production profitable for Russia.”

“A limit on the price of Russian oil would deny Putin revenue his war machine needs and would build on the historic sanctions we have already implemented that make it more difficult for him to wage his war or grow his economy,” she said.

“It will also aid in maintaining the global supply of oil, helping put downward pressure on prices for consumers in America and globally at a time when energy prices are spiking.”