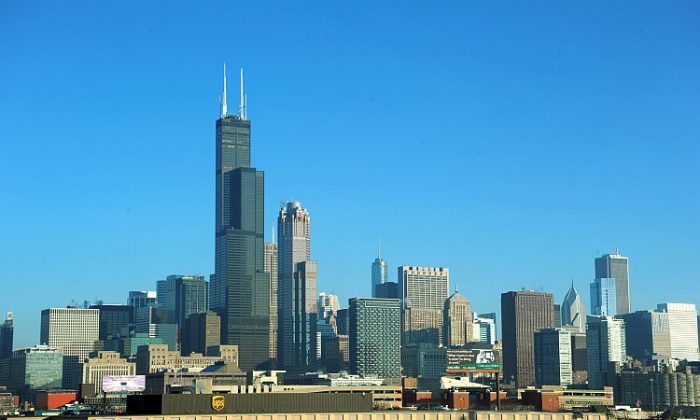 The Chicago skyline is seen from I-90. The White House said that it is shifting the May G-8 forum, from Chicago to Camp David. Questions have been raised as to the reason for the move. (Karen Bleier/AFP/Getty Images)
US

The White House said that it is shifting the May G-8 (Group of Eight) forum, consisting of leaders of the world’s eight largest economies, from Chicago to Camp David.

Although security analysts suggest the move may have been due to increased terrorist concerns, the White House has insisted the change was done to create a G-8 summit more conducive to informal discussion.

In an usually late change of plans, the White House issued a statement Tuesday March 6, saying it would “facilitate a free-flowing discussion with our close G-8 partners” by moving the conference from President Barack Obama’s hometown to the presidential retreat in Maryland.

Last June, the Obama administration announced plans to hold the summit in Chicago. It was the first time an American city, other than Washington, was to host a G-8 summit.

Speaking at his first White House press conference of the year Tuesday, President Obama said that, sometime after the Chicago meetings were organized, it had been noted how he had spent little time with his international counterparts during his time as president, and the suggestion had been made that Camp David could provide such an opportunity.

“G-8 tends to be a more informal setting in which we talk about a wide range of issues in a pretty intimate way,” he told reporters, “And the thinking was that people would enjoy being in a more casual backdrop.”

Replying to a question raised about security concerns, the president noted that NATO would follow the May 18–19 G-8 summit in his hometown Chicago as planned.

“I always have confidence in Chicago being able to handle security issues,” he said.

Concerns have been raised that the move may have been precipitated by security threats posed by protesters. G-8 meetings held in the past have attracted large and sometimes violent protests, and shifting the conference to Camp David, which is located in the Maryland mountains, would be unlikely to draw as much in the way of public demonstrations.

Carl Conetta, co-director of the Project on Defense Alternatives (PDA), says it is unlikely the threat of protests precipitated the change but suspects security concerns may be underlying.

“There may be other concerns that have to do with warnings about a terrorist attack which would seem to me to be more likely to have such a dramatic change,” he told The Epoch Times.

But Bruce Jones, director of the Managing Global Order initiative, believes the move is consistent with the Obama administration’s theme of “getting back to basics.”

Jones noted that G-8 meetings have become increasingly formal, “festooned” with multiple agendas and huge communiqués, many of which have been largely pre-negotiated.

“I think they have really been working to get back to a more basic process where the leaders actually discuss issues and there are much, much more streamlined outcomes and a much shorter communique, so I see the move to Camp David as fitting in with that theme,” he said.

President Obama made a point of mentioning during the press conference that the Camp David move would allow him to have informal talks with Vladimir Putin.

But there may be other reasons that Putin factors into the move.

G-8 countries Russia and Japan are not a part of NATO, but Putin may be more sensitive to the other leaders going straight from the G-8 meetings into the NATO conference.

“How, when it is in the same city, do you say thanks for the meeting now here is the door and on to the next meeting,” Jones said.

Jones said he does not know if it was a factor in the move, but it may save the president from an awkward situation.