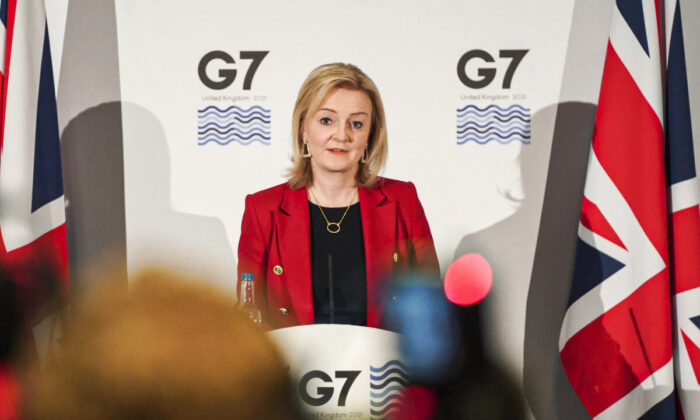 The Group of Seven (G-7) major industrialized countries warned Russia on Dec. 12 that any invasion of Ukraine would have “massive consequences” and would incur “a severe cost.”

In a statement issued after a two-day summit held in the English city of Liverpool, G-7 foreign ministers said they were “united in [their] condemnation of Russia’s military build-up and aggressive rhetoric towards Ukraine.”

The foreign policy chiefs from the United States, the UK, Canada, France, Germany, Italy, Japan, and the European Union, called on Russia to “deescalate, pursue diplomatic channels, and abide by its international commitments on transparency of military activities.”

“Any use of force to change borders is strictly prohibited under international law,” they said. “Russia should be in no doubt that further military aggression against Ukraine would have massive consequences and severe cost in response.

“We reaffirm our unwavering commitment to Ukraine’s sovereignty and territorial integrity, as well as the right of any sovereign state to determine its own future.”

Truss said the UK is considering “all options” including economic sanctions in response to potential Russian aggression.

“When the UK has wanted to send clear messages and achieve clear goals, we have been prepared to use economic sanctions. So we are considering all options,” she told reporters.

The warning comes amid rising tensions over a Russian troop buildup on the Ukrainian border, which is seen as a sign of a potential invasion.

Western countries view Ukraine as a bulwark against Russia, which harbours ambitions for more territorial control. Russia seized Crimea in 2014, when former U.S. President Barack Obama was in office.

Truss also said the G-7 is concerned about China’s “coercive economic policies” across the globe.

“We have been clear at this meeting this weekend that we are concerned about the coercive economic policies of China,” she said. “And what we want to do is build the investment reach, the economic trade reach, of like-minded, freedom-loving democracies.”

Talking about the Iran nuclear issue, Truss warned the Islamic regime that the ongoing talks with world powers in Vienna is “the last chance for Iran to come to the negotiating table with a serious resolution to this issue.”

She reiterated that the international community “will not allow Iran to acquire a nuclear weapon.”

Zachary Stieber, Reuters, and PA contributed to this report.