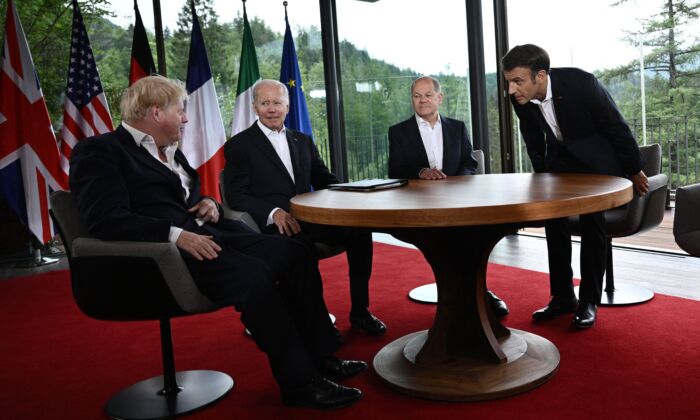 The Group of Seven (G-7) criticized the Chinese regime on June 28 over its unfair trade policies and human rights abuses. The G-7 leaders also urged Beijing to drop “expansive maritime claims” in the South China Sea and press Moscow to stop its invasion of Ukraine.

At the end of the three-day summit in the Bavarian Alps, leaders of the world’s wealthiest democratic nations issued a highly critical communiqué that laid out a range of challenges posed by the communist regime in China. The document focused on Beijing’s unfair trade practices, a complaint that first appeared in last year’s document.

In 2021, G-7 leaders first discussed the need for a unified position in countering Beijing’s “non-market policies and practices.”

The collective statement is “unprecedented in the context of the G-7, acknowledging the harms caused by China’s non-transparent, market-distorting industrial directives,” an unnamed senior U.S. administration official said at a June 28 press briefing.

The White House statement noted that countries outside the group would also be consulted on collective approaches to counter Beijing’s unfair trade policies and practices. The G-7 includes the United States, Canada, the UK, Germany, Italy, France, and Japan.

Leaders will “build a shared understanding of China’s non-transparent and market distorting interventions and other forms of economic and industrial directives,” the White House statement reads.

“We will then work together to develop coordinated action to ensure a level playing field for our businesses and workers, to foster diversification and resilience to economic coercion, and to reduce strategic dependencies.”

On the first day of the summit on June 26, G-7 leaders unveiled an infrastructure plan in which they pledged to raise $600 billion in public and private sectors over the next five years to finance projects ranging from digital infrastructure to health care for less developed countries.

The initiative would counter China’s Belt and Road Initiative (BRI, also called “One Belt, One Road”), a multi-billion dollar plan that has been criticized as a form of “debt trap” diplomacy that saddles poor and developing nations with unsustainable debt levels while bolstering Beijing’s political influences in those countries.

The communiqué states that G-7 leaders are “gravely concerned”—a term not used in last year’s summit—about the human rights violations in China, particularly forced labor in Xinjiang and Tibet.

The Chinese Communist Party (CCP) has incarcerated more than 1 million Uyghur and other Muslim minorities in internment camps in the far-western Xinjiang region, where detainees have been subjected to forced sterilization, torture, political indoctrination, and forced labor.

The G-7 will “accelerate progress to tackle forced labor, with the goal of removing all forms of forced labor from global supply chains, including state-sponsored forced labor, such as in Xinjiang,” according to a White House fact sheet.

Washington highlighted the efforts made by the Biden administration to combat the CCP’s human rights abuses by banning imports made by forced labor in Xinjiang. The Uyghur Forced Labor Prevention Act came into effect on June 21.

The group also called on Beijing to “honor its commitments” by restoring Hong Kong’s rights, freedoms, and autonomy.

The communiqué called out Beijing’s maritime claims in the East China and South China seas and its unilateral attempts to change the status quo by force or coercion.

“We stress that there is no legal basis for China’s expansive maritime claims in the South China Sea,” it states.

The document highlighted “the importance of peace and stability across the Taiwan Strait” amid growing concern that Beijing could use the Russia–Ukraine war as an opportunity to seize Taiwan. The CCP views the self-ruled democratic island as its own territory, to be taken by force if necessary.

The communiqué reminded Beijing to uphold its obligations under the U.N. Charter and “abstain from threats, coercion, intimidation measures or use of force.”

The G-7 leaders also urged China to press Russia to “immediately and unconditionally withdraw its troops from Ukraine.”

Western officials have been concerned over the burgeoning alliance between Beijing and Moscow since they first announced a “no limits” partnership on Feb. 4.

The communiqué was released hours before U.S. President Joe Biden and other leaders headed to a NATO summit in Madrid. NATO is expected to address the Chinese regime’s growing threat, calling the country a “systemic challenge” in its new strategic report.