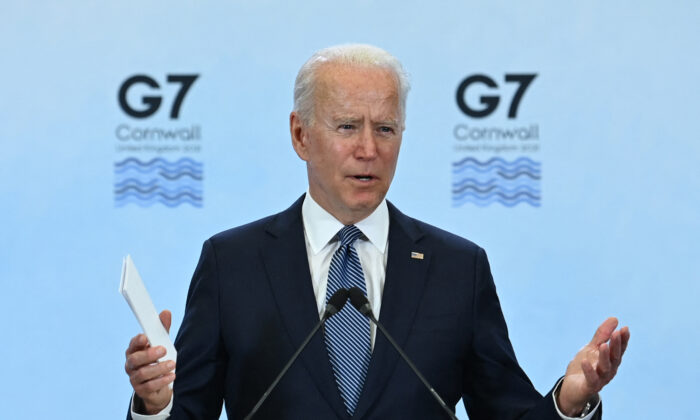 President Joe Biden takes part in a press conference on the final day of the G-7 summit at Cornwall Airport Newquay, near Newquay, Cornwall, on June 13, 2021. (BRENDAN SMIALOWSKI/AFP via Getty Images)
International

Leaders of the world’s seven richest nations on June 13 agreed to counter Beijing’s growing influence in developing countries through its controversial development program, the Belt and Road Initiative, which has left many poor nations with heavy debt loads.

The advanced economies pledged to provide a “democratic alternative” to China’s ambitious program to address the infrastructure gap in poor countries, which has been exacerbated by the pandemic.

“Reflecting our shared values and shared vision, we will aim for a step change in our approach to infrastructure financing, notably on quality infrastructure and investment, to strengthen partnerships with developing countries and help meet their infrastructure needs,” the communiqué states.

The new initiative, called Build Back Better World, or B3W, will help finance bridges, ports, roads, and other infrastructure projects in developing countries. It will apply “transparent, open, economically efficient, fair, and competitive standards for lending and procurement.” It also will mobilize private sector capital and expertise.

The objective is to help meet the more than $40 trillion infrastructure need in the developing world, according to President Joe Biden.

“The point is that what’s happening is that China has this Belt and Road Initiative, and we think that there’s a much more equitable way to provide for the needs of countries around the world,” Biden said on June 13 at a press conference after the conclusion of the summit.

Since its launch in 2013, the Belt and Road Initiative (BRI, also known as One Belt, One Road) has poured billions of dollars into emerging countries to help build massive infrastructure projects. The initiative, however, has been perceived as a “debt trap,” raising the risk of economic distress in borrower countries through unsustainable loan levels and opaque contracts.

The G-7 initiative “will be good for the entire world and represent values that our democracies represent, and not autocratic lack of values,” Biden said.

The G-7 leaders agreed to put together a committee that will work on the details of the global infrastructure initiative, Biden said.

The G-7 countries also reiterated calls for supporting the poorest nations as they continue to face significant debt crises. These countries face inequality in terms of access to credit markets and have growing fiscal deficits.

Since the start of the pandemic, both the World Bank and the International Monetary Fund (IMF) have been urging the world’s 20 wealthiest economies (G-20), including China, to provide temporary suspension of debt service payments to the world’s poorest countries to avert a debt crisis.

Low-income countries will need roughly $200 billion to combat the pandemic and $250 billion in investment spending for the next four years, according to the summit communiqué that cited the IMF’s estimates.

China is the world’s largest creditor, accounting for almost 65 percent of official bilateral debt. While China and other countries agreed to provide debt relief for countries that are in financial distress, Beijing’s opaque lending practices complicate these relief efforts.

“We support fair and open lending practices, and call on all creditors to adhere to these,” the communiqué stated.

Most BRI projects are financed mainly through a wide range of Chinese local government and state-controlled institutions.

A study led by AidData, a U.S. research lab at the College of William and Mary, showed that China’s loan contracts with emerging countries have uncommon secrecy provisions, collateral arrangements, and debt renegotiation restrictions.

The researchers analyzed the legal terms of 100 Chinese loan contracts to 24 developing countries, many of which have participated in the BRI. They conducted an in-depth review over a 36-month period and found that China’s loan contracts contained unusual confidentiality clauses that prevented borrowing countries from disclosing the terms or sometimes even the existence of the loan contracts.

The study also found that contracts contained provisions that placed Chinese state-owned lenders as senior creditors whose loans should be repaid on a priority basis. Informal collateral arrangements put Chinese creditors at the top of the repayment line.

In addition, Chinese lenders were given the freedom to terminate loans or accelerate repayment if they disagree with a borrower nation’s policies.

China’s debt-trap diplomacy also has allowed Beijing to expand its human rights abuses. There’s an increase in harassment of Chinese dissidents abroad. China also has been using its economic and political influence to silence critics in developing countries.

The BRI encompasses 139 countries, including China. These countries account for 40 percent of the global economy and 63 percent of the world’s population, according to the Council on Foreign Relations.