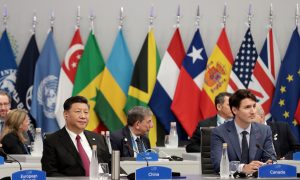 World leaders pose for a group photo at the Colon Theatre during the G-20 Summit in Buenos Aires, Argentina, on Nov. 30, 2018. (Guido Bergmann/Bundesregierung via Getty Images)
US-China Relations

WASHINGTON—The leaders of the world’s top economies are gearing up for the G-20 summit this week in Osaka, Japan, where they will discuss a host of issues, including the current slow down in economic growth and possible reforms to the global trading system.

In addition, bilateral talks on the sidelines will likely draw as much attention as the formal discussions around the table.

There are plenty of problems to discuss at the summit but the central theme will be the core mission of G-20, which is to support “strong, sustainable, balanced and inclusive growth.”

The current U.S.–China trade dispute could shave 0.5 percent off the global economy, according to IMF estimates. The major concern for the IMF is that the policymakers are left with little space to maneuver with respect to both monetary and fiscal stimulus. World leaders will be meeting at a time of uncertainty in global growth to address these issues.

As with last year, there will be substantial discussions at the summit on trade, including reform of the World Trade Organization (WTO).

At the last G-20 summit, the leaders agreed for the first time to reform the more than 20-year-old WTO, backing President Donald Trump, who has repeatedly called the organization a “disaster.” They called on “the necessary reform of the WTO to improve its functioning,” and also stated in the communiqué that they would review progress at the next summit.

“Osaka would mark a step forward if it identified specific priorities for reform,” according to Matthew Goodman, senior vice president at the Center for Strategic and International Studies (CSIS).

“They should include fixing the dispute-settlement mechanism and requiring greater transparency around trade-distorting policies such as subsidies,” he wrote in an article.

On the sidelines of this year’s summit, Trump will hold bilateral meetings with the leaders of Russia, Turkey, and China, which are expected to draw a lot of attention.

Trump said last week that he would meet with Russian President Vladimir Putin at the summit.

At the last G-20 summit, Trump refused to meet with Putin because of the fresh incident in which Moscow held captive Ukrainian ships and 23 sailors near Crimea, according to Heather Conley, senior vice president at CSIS.

“Fast forward, those 23 Ukrainian sailors are still in jail. There’s been no movement on that front,” she told reporters, adding there has been no sign of progress on the issue.

At the meeting, the two leaders may discuss an arms control framework, according to Conley. Russia ended the Cold War-era Intermediate-Range Nuclear Forces Treaty (INF) in March. Putin’s action came after the Trump administration accused Russia of violating the Reagan-era accord and announced it would abandon the deal. The United States will formally withdraw from the agreement by August.

“There is a massive space here to think about arms control, yet there is no process that we are aware of,” Conley said. In addition, Iran could potentially be a very important topic of discussion between Trump and Putin, she said.

Trump’s potential meeting with President Recep Tayyip Erdogan of Turkey involves another complicated bilateral relationship. Turkey is determined to go ahead with the purchase of an advanced Russian S-400 air defense system, despite U.S. warnings. The first missiles and their associated radars will be delivered in July.

If the deal goes ahead, the United States warned Ankara that it would remove Turkey from the F-35 fighter jet program. Turkey has defied U.S. sanction threats.

“No matter what sanctions decision, no matter which statement comes from the U.S., we have already bought the S-400s,” Foreign Minister Mevlut Cavusoglu told reporters on June 24.

Erdogan will be going to the G-20 on the heels of the June 23 Istanbul municipal elections, where his party suffered a historic defeat.

The world’s eyes will be on the meeting between Trump and Chinese leader Xi Jinping during the summit, as both leaders try to get the trade talks back on track. While the outcome of the talks is hard to predict, any consensus over trade can bring a huge relief to investors.