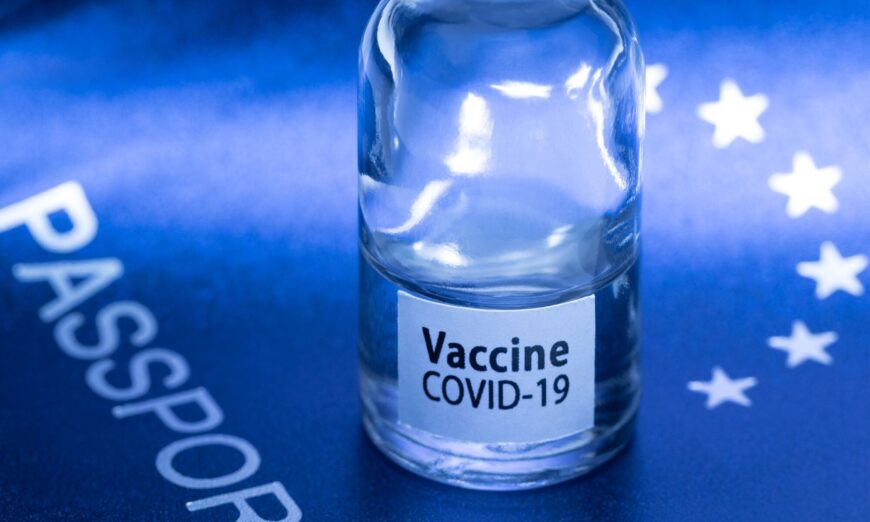 A vaccine vial on a European passport in Paris, on March 3, 2021. (Joel Saget/AFP via Getty Images)

Leaders of the Group of 20 (G20) have issued a joint declaration promoting a global standard on proof of vaccination for international travel and calling for the establishment of “global digital health networks” that build on existing digital COVID-19 vaccine passport schemes.

The joint statement followed the conclusion of the G20 summit held in Bali, Indonesia, where leaders discussed global challenges and coordinating policies in response, including to future pandemics.

“We acknowledge the importance of shared technical standards and verification methods, under the framework of the IHR (2005), to facilitate seamless international travel, interoperability, and recognizing digital solutions and non-digital solutions, including proof of vaccinations,” the G20 joint declaration reads.

The International Health Regulations (2005) is an instrument of international law developed under the auspices of the World Health Organization (WHO) that lays down a global framework for responding to the international spread of disease.

The WHO-backed standard, which entered into force in 2007, required countries to strengthen surveillance capacities at border crossings and introduced a series of health documents, including international certificates of vaccination.

Besides acknowledging the utility of the IHR framework, the G20 leaders said they support ongoing “international dialogue and collaboration on the establishment of trusted global digital health networks as part of the efforts to strengthen prevention and response to future pandemics.”

They added that these global digital health networks should “capitalize and build on the success of the existing standards and digital COVID-19 certificates.”

COVID-19 vaccine passports—and various other forms of digital identity schemes—have been criticized as an invasion of privacy and as having the potential to enable governments and corporations to coerce human behavior by, for instance, denying access to infrastructure or services.

‘Let’s Have a Digital Health Certificate’?

The joint declaration follows recommendations from Indonesia’s Minister of Health Budi Gunadi Sadikin made during a Business 20 (B20) panel held ahead of the G20 summit.

“Let’s have a digital health certificate acknowledged by WHO—if you have been vaccinated or tested properly—then you can move around,” he said during a panel on Nov. 14.

Sadikin added that the benefit of a global WHO-standardized vaccine passport would be to facilitate international travel.

Sadikin added that G20 countries have agreed to such a global digital health certificate and that the idea now is to introduce it as a revision to the IHR framework at the next World Health Assembly, scheduled for May 2023 in Geneva, Switzerland.

In a 132-page document that contains a series of recommendations for the G20, the B20 urged the widespread adoption of digital documentation of COVID-19 certificates that would be part of a “technology-enabled ‘always-on’ global health infrastructure.”

The World Economic Forum (WEF) said in a February 2022 report (pdf) that vaccine passports serve as a form of digital identity.

In an earlier report (pdf), the WEF said that “digital identity determines what products, services and information we can access—or, conversely, what is closed off to us.”

Journalist Nick Corbishley, who writes about economic and political trends in Europe and Latin America, has warned that vaccine passports can lead to the implementation of a global digital identity scheme that will threaten privacy and freedom across the world.

“It’s like this checkpoint society. Wherever you want to go, you have to show your mobile phone, your identity … even if it’s just to go into a supermarket or go into a shop,” he told EpochTV’s “Crossroads” program.

Corbishley described the negative aspects of a global digital identification scheme as a kind of “digital gulag” in which people could be “effectively banished from society.”

“That is a terrifying vision,” he said.