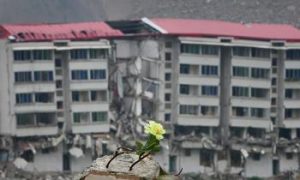 A bid by officials to seek rents from residents in Fuzhou city led to anti-regime abuse online and calls for protest late last month.

Officials issued a scooter replacement policy that unnecessarily set a new standard for scooters, forcing the between 600,000 and one million scooter owners in the city to buy new ones—and they say that the new approved scooters are inferior to those allowed previously.

A battery of new fees, inspection costs, and fines was also rolled out.

The Legal Daily published a nearly 20,000 word report dissecting in detail the mechanics of the new policy. In the end many Fuzhou residents will have to pay from 3,000 to 6,000 yuan ($460 to $920) to replace their scooters, in what many see as a typical instance of the corruption that plagues China.

Initiators of China’s “Jasmine Movement” in Fuzhou city, the capital of Fujian Province in southern China, have called for the public, rather than take it lying down, to take to the streets and protest against the plan.

The policy was actually rolled out by the Fuzhou city government in 2010, and the replacements began in May 2010—it is expected to be a three year process.

The Fuzhou city government requires scooter manufacturers and retailers to apply for certificates from the city inspection agency. Without the certificate, no licenses are issued, and scooters can’t be sold.

A regime of fines for drivers with older scooters was rolled out at the beginning of March.

Scooter stores have sprung up across town. Yadi scooter’s Fuzhou sales representative told Legal Daily: “The best business opportunities are in Fuzhou where a store sells between 300 and 500 scooters a month… there are at least 1 million old scooters and only 200,000 have been replaced with new ones.”

But people forced to buy into the new standard are not so sanguine. On Jan. 22 an article titled “Exposing the Beneficiary Chain behind the Scooter Replacement Policy and the Way to Quick Fortune in Scooter Sales” appeared on the Internet. Heated discussions about the topic began among residents.

“Those so-called qualified scooters are not really qualified,” the 4,000 word post said. Written by a scooter industry insider, it said that the battery weight, speed, and motor in the new scooters are not up to scratch.

Chen Dong, the author of the post, says he once served as a manager in a scooter shop. He said he “is very familiar with the ‘public rules’ and ‘hidden rules’ of the industry,” and told Legal Daily that it took him a week to write down all the details he knew.

The Legal Daily report also quoted two experts in the field: Professor Ma Guilong from Tsinghua University, who has been researching scooter for 20 years, and Ni Jie, the CEO of Green Scooter and also a researcher. Both of them admitted that the stability, sturdiness, lights, and brakes on the new scooters are inferior to those of the older ones.

“When we bought the scooters years ago, the government did not say ‘no.’ Now they’re banned. After spending so much more money, we still bought scooters that do not meet the standard. Maybe one day they will be banned again?” a resident calling himself Lin Qing wrote on the blog.

Fuzhou’s Jasmine Movement participants said that that the national scooter standards (travel less than 20kph, weigh less than 40kg, of power less than 240W) were defined in 1999, but that they’re out of date.

But the central regime does not want to define new standards, and this has affected about 150 million scooter owners in China. Most scooter riders are workers or lower class citizens for whom the scooter is the main form of transportation. A new scooter may cost between 3 to 5 months’ savings of a menial worker.

Fuzhou’s Jasmine Movement organizers and others online said that they believe Fuzhou Party secretary Yuan Rongxiang, Fuzhou Mayor Su Zengduo, scooter businessmen, the inspection agency, and traffic police are all part of a larger scheme to use government regulations to seek rents from citizens.