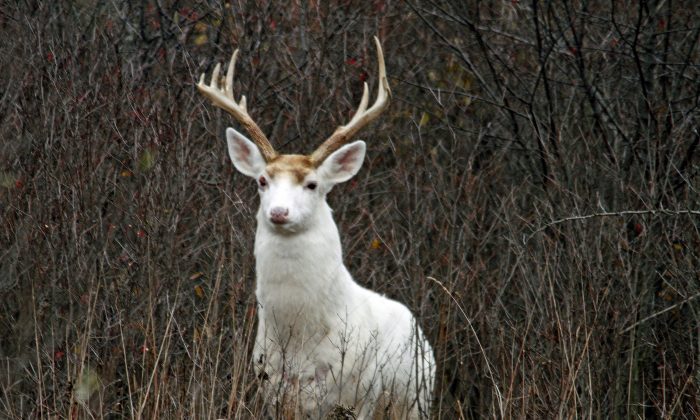 The white deer — a genetic quirk that developed naturally on the 7,000-acre, fenced-in expanse — have thrived, even as the depot itself has transitioned from one of the most important Cold War storehouses of bombs and ammunition to a decommissioned relic.

Now, as local officials seek to put the old Seneca Army Depot up for bids next month, there is concern that the sale could also mean the end of the line for the unusual white deer. A group of residents dedicated to saving the animals has proposed turning the old depot into a world-class tourist attraction to show off both its rich military history and its unusual wildlife. The Nature Conservancy also is looking at options for preserving the largely undeveloped landscape.

“When we ran bus tours on a limited basis between 2006 and 2012, we had people come from all over the United States to see the deer,” said Dennis Money of Seneca White Deer Inc. “People are enchanted by them.”

The white deer owe their continued existence to 24 miles of rusting chain-link perimeter fencing that went up when the depot was built in 1941, capturing several dozen wild white-tailed deer in the area’s extensive woodlands. The white deer are natural genetic variants of the normal brown ones. They’re not albinos, which lack all pigment, but are leucistic, lacking pigment only in their fur.

In the wild, white deer are short-lived, being easy targets for predators and hunters looking for a unique trophy. Small herds of white fallow deer roam protected sites in Ireland and on the campus of the Argonne National Laboratory in Illinois, but the Seneca Army Depot has the largest known population of white white-tailed deer, Money said.

With protection from the Army and its fence, the Seneca white deer have grown to an estimated 200. If buyers take down the fence, the white deer aren’t expected to last long.

For now, the white deer, and about 600 brown ones, roam woods and fields surrounding overgrown weapons storage bunkers, cracked roads and rusted railroad tracks. In the bright sunshine of midday, small groups of deer can be glimpsed in mowed lanes and clearings maintained by the Army. But early morning and evening are the best time to see them, and cars pull over along bordering public highways as people stop to watch. Visitors aren’t allowed inside the fence.

“They’re a huge tourist attraction,” said Lisette Wilson, who runs a farm store and bakery with her husband across the highway from the depot fence. “People are astonished. It’s quite the spectacle for them.” The store’s most popular product is “White Deer Poop,” a confection made of white chocolate, almonds and cranberries, she said.

The depot, completed a month before the Japanese attacked Pearl Harbor, provided for the ordnance storage needs of the nation for 60 years. It covered an area larger than the city of Syracuse, 40 miles to the northeast, and stored bombs and ammunition in 500 steel-and-concrete bunkers called igloos.

The Army Corps of Engineers has maintained the site during environmental cleanup operations since the depot closed in 2000. The Army plans to finish cleanup work by the end of next year, leaving the land and its deer under the care of new owners.

Bob Aronson, executive director of the Seneca County Industrial Development Agency, said his goal is to sell the whole parcel by the end of the year to one or several buyers. All offers will be considered, he said, noting that the greatest interest has been from farmers who would graze cattle and grow crops.

Seneca White Deer has launched a fundraising drive in hopes of buying at least 2,000 to 3,000 acres, if not the whole site, for a tourist attraction and wildlife preserve, Money said.

Jim Howe, director of The Nature Conservancy’s regional chapter, said the preservation group is conferring with several groups about protecting the former depot’s wildlife habitat while opening it for recreation, tourism and sustainable economic development.

Another hope for the deer has come from Aronson’s offer to the towns of Varick and Romulus, where the depot lies, that they can have the land within their borders for a dollar if they want to market it themselves.