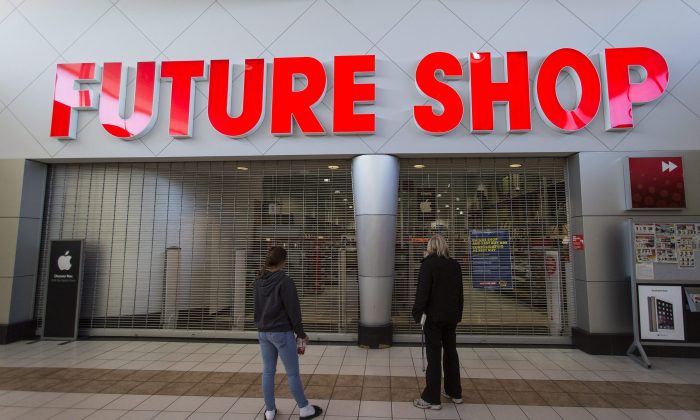 And in order to survive, retailers will need to create engaging shopping experiences that lure customers into stores by providing something that can’t be found online, said Bruce Winder, a senior adviser with retail advisory firm J.C. Williams Group.

Best Buy, the U.S. company that bought Future Shop in 2001, announced last Saturday that it was closing 66 Future Shop locations and rebranding the remaining 65 as Best Buy stores.

Future Shop is the latest casualty in an increasingly sparse Canadian retail landscape. Target is in the process of shutting all 133 of its Canadian stores. Clothing retailers Mexx and Jacob are also vacating outlets and Sony announced plans in January to close all 14 of its Canadian locations.

Experts say heightened competition from online retailers such as Amazon and eBay is making for a challenging retail environment.

Mark Satov, a retail analyst with Satov Consultants, said retailers need to give customers a reason to go to a store.

That could be advice from knowledgeable sales associates, who can help you determine which surround sound system would be best suited for your home—something that electronics stores like Best Buy do particularly well, Satov says.

The challenges are particularly dire in the electronics category. Winder says roughly a third of Canadians go online to purchase electronics. Meanwhile, a growing number of shoppers go to stores to view the merchandise, then purchase the items online for a lower price.

The move of Canadians to urban centres is also transforming the retail scene, creating challenges for destination big-box shopping centres in the suburbs. Many of those malls could struggle to fill vacant Future Shop and Target stores, Winder said.

“You’re going to see a number of the malls outside of the cities start to be challenged to fill space,” Winder said. “Folks are buying more online. People are moving in to the cities more.”

Shopping centres in dense, urban centres are likely to fare better, as many condo dwellers view shopping as a fun, social activity that gives them an excuse to leave their shoebox-sized homes for a few hours.

In order to thrive, retailers will need to take advantage of mobile technology, Winder said.

“Eventually consumers will walk into a store and if they’ve opted in, there will be beacon technology that recognizes that consumer’s in the store via their smartphone or tablet and retailers may send a coupon to them while they’re in the store to get a discount, or may invite them to purchase something that is complementary to something they purchased last week,” Winder said.

“Where it’s leading is more of a one-to-one relationship between companies and consumers where companies serve up specific offers, products, assortments, and pricing to individual consumers based on their preferences.”