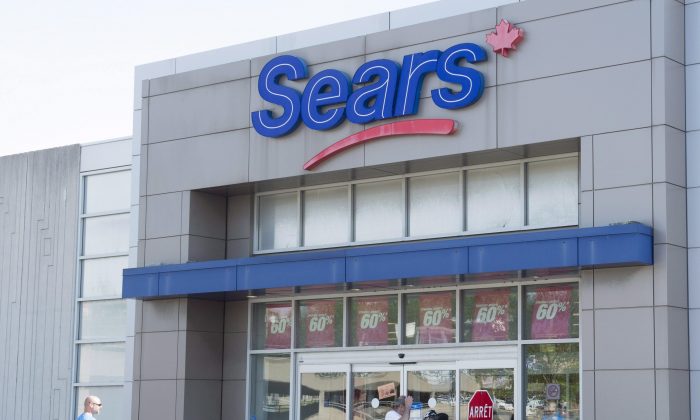 A Sears Canada outlet in Saint-Eustache, Quebec. The retailer has warned there are doubts about its ability to continue operating, and says it may have to restructure or be sold. (The Canadian Press/Ryan Remiorz)
Business

TORONTO—Sears Canada, known for its catalogues that were a household staple for generations, says there is “significant doubt” about its future and it could sell or restructure itself.

The struggling retailer, which tried to reinvent itself last year with a new corporate logo, said it doesn’t expect to have enough cash flow over the next 12 months to meet its obligations. It’s the latest sign of how the retail sector is being upended by numerous factors, including the rise of online shopping.

“The company continues to face a very challenging environment with recurring operating losses and negative cash flows from operating activities in the last five fiscal years, with net losses beginning in 2014,” Sears Canada said in a statement.

“While the company’s plans have demonstrated early successes, notably in same-store sales, the ability of the company to continue as a going concern is dependent on the company’s ability to obtain additional sources of liquidity in order to implement its business plan.”

In a retail world dominated by the likes of Amazon, Sears Canada has floundered, a relic of a bygone shopping era where the department store was king.

The mid-line department stores are getting squeezed out.
— Mandeep Malik, DeGroote School of Business

The company’s executive leadership has been a veritable revolving door, having gone through several changes over the last four years.

Despite its recent efforts to turn itself around, the writing has been on the wall for Sears Canada for about a decade, said Mandeep Malik, an assistant professor at the DeGroote School of Business at McMaster University.

“It was a too-little, too-late kind of story,” he said.

Malik said Sears Canada has failed to meet customer expectations when it comes to service, choice and price, and it now finds itself trying to play catch-up in a hyper-competitive marketplace. Its decline is symptomatic of a broader trend in retail, he added.

“The mid-line department stores are getting squeezed out.”

Last week, rival Hudson’s Bay Co. said it is cutting about 2,000 jobs across North America in an effort to help it compete in an increasingly tough retail environment, partly due to the rise of e-commerce.

Sears Canada’s announcement came as it reported a first-quarter loss of $144.4 million, more than double what it was a year ago. Its revenue slipped by about $90 million to $505.5 million, a decline of 15.2 percent.

The company said it had expected to be able to borrow $175 million for additional liquidity, but that has been reduced to about $109 million. It said it also lacks other assets, such as real estate, that can be monetized in a timely manner.

“Accordingly, such conditions raise significant doubt as to the company’s ability to continue as a going concern,” it said.

Spokesman Vincent Power said in an email it’s not clear yet whether there will be any layoffs at the company, which had about 16,000 employees as of the quarter ending April 29.

Still, Sears Canada maintained some positivity about its outlook, pointing to a 2.9 percent increase in same-store sales, a key metric in retail that measures sales at locations open for at least a year. That came, however, as the number of its stores dropped. Sears Canada has 94 department stores, 23 Sears Home stores, and 10 outlets.

The department store chain also postponed its annual meeting, which had been scheduled for June 14, until an unspecified date.