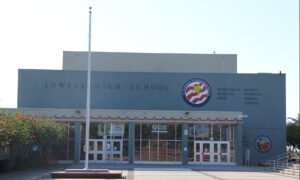 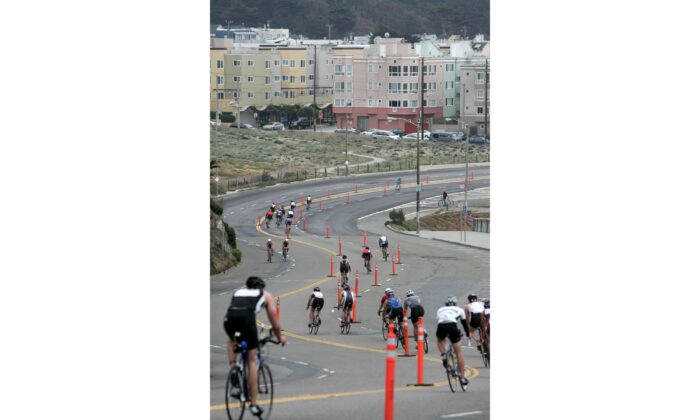 Athletes race down the north end of the Great Highway during the bike portion of the Escape from Alcatraz Triathlon in San Francisco, Calif., on June 3, 2007. (Jed Jacobsohn/Getty Images)
Viewpoints 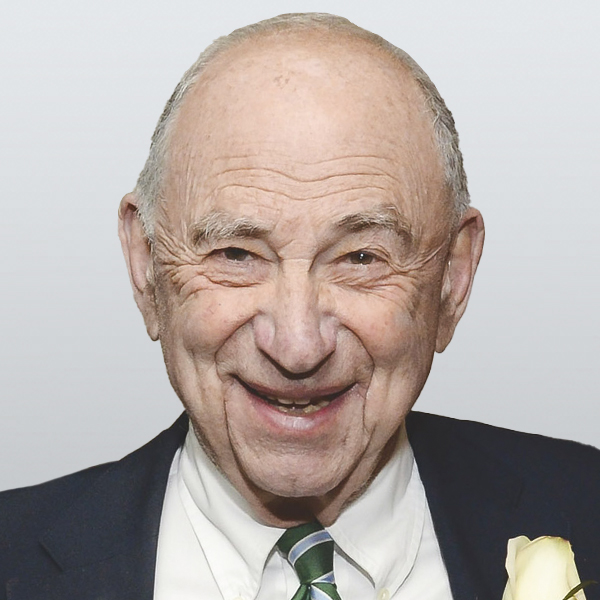 That’s currently the problem affecting residents and business owners in our Sunset and Richmond Districts regarding the Upper Great Highway, a four-lane divided roadway running north-south for two miles between Lincoln Way and Sloat Boulevard. Immediately east is an adjacent, paved multi-use recreational path paralleling the Great Highway. Immediately west lies a parallel dirt path with sand dunes above an expansive sandy beach which feeds into the Pacific Ocean. No four-way intersections exist on the entire Great Highway, meaning no automobile can turn right or left and no cross-traffic, thus ensuring safety! It constitutes the shortest, most efficient route for commuters travelling to or from the Sunset and Richmond Districts and the Peninsula or other destinations south. It is also the most efficient route for San Franciscans and others travelling to and from Ocean Beach, the Zoo, Fort Miley Veterans Hospital, Golden Gate Park, Legion of Honor, Beach Chalet and adjacent soccer fields, Lakeshore Plaza, and schools and parks in the Richmond and Sunset. Before COVID-19, 17,600–19,900 drivers travelled the Great Highway daily.

Last April, however, City Hall closed the Great Highway to motor vehicles temporarily to provide additional space for recreation while maintaining social distances. Social distance necessity has subsided, but a closed-door effort never to reopen the Great Highway to automobiles—fostered by the San Francisco Bicycle Coalition, Walk SF, and allied groups—invites willing collaborators like Municipal Transportation Agency chief executive Jeffrey Tumlin, the Recreation and Parks Department, the San Francisco County Transportation Authority (CTA), and Supervisor Gordon Mar who plot permanent closure despite a petition with over 8,100 signatures urging reopening. Led by such great San Franciscans as Geoffrey Moore, retired City College professor Patricia Arack, Ignacio Orellana-Garcia, and Alyse Ceirant, Concerned Residents of the Sunset understandably allege a CTA report (concerning the Great Highway’s future) presented on March 27, 2021 to Sunset and Richmond residents was “manipulative, grossly incorrect, and insulting to hundreds of residents.” Peter Pirolli, Ph.D., a scientist at the Institute for Human and Machine Cognition (regarding human psychology, artificial intelligence, and data science), wrote a blistering analysis of such report in which he characterized it as “just an awful insult to the intelligence of the audience.”

The report’s worst aspect is its preparation during a pandemic, with a clear purpose to close the Great Highway forever. The CTA alleges overwhelming support for permanent closure despite its own data that 52 percent in the Richmond want reopening, with the rest favoring partial opening on weekdays. Another CTA finding that 4,000 walkers/bikers use the Great Highway every weekday and 6,000 on weekends represents an impossibility. Dr. Pirolli notes the 4,000 number derives from a small sensor close to Lincoln Way and Judah Street which has the most foot traffic. That ignores overcounting because of roundtrips. How many of the “4,000” were walking on the bicycle path? Or, just looking and returning to Java Beach for coffee? CTA produces no data on the number of cars congesting Lincoln Way, Sunset Boulevard, and 19th Avenue.

Meanwhile, single family neighborhoods on 46th Avenue, 47th Avenue, and adjoining streets suffer from an increase in the number of accidents. Construction and maintenance of local streets, like the Great Highway, were paid by vehicle users through gasoline taxes since 1922 (bicycle owners and walkers enjoy a “freebie”). Also ignored by City Hall is insufficient police officers at the Taraval Police Station to enforce innumerable traffic violations in the area. Scofflaws abound. Many residents would accept a compromise with the Great Highway opening during the week to relieve gridlock and closing to automobiles on the weekends. The recently repaired bicycle path has existed for years. A precarious sewage line exists under the Great Highway. Yet an environmental evaluation under the California Environmental Quality Act has been rejected by Tumlin and his bureaucrats which means litigation if the Board of Supervisors and Mayor authorize permanent closure of the Great Highway. It has already galvanized citizens into starting a petition to save the Great Highway, available online at: www.change.org/openthegreathighway. Readers can also visit its website to help the cause at www.openthegreathighway.com.

Meanwhile, the beat to recall District Attorney Chesa Boudin continues with it probably qualifying for the next municipal election despite a nasty West Portal Avenue attack on a female signature-gatherer. Money spent by anti-police moguls like George Soros won’t save a district attorney who, The San Francisco Examiner reported last month, prosecutes “far fewer shoplifting cases than his predecessors.” (Predecessor George Gascon faces his own recall as Los Angeles County District Attorney.) Boudin told The Examiner his office won’t prosecute such cases because of limited resources or a desire to pursue other types of crime. As San Mateo County District Attorney Steve Wagstaffe remarked, his office doesn’t base prosecution decisions on prioritization or a lack of resources in an epidemic, but rather on whether the prosecution can prove a case. Maybe Mr. Wagstaffe can give District Attorney Boudin lessons which Boudin ignores as a public defender at heart. Lest society be accused of dehumanizing someone charged with a crime, I’m reminded of an anonymous quip: “Most reformers insist that their conscience be your guide.”