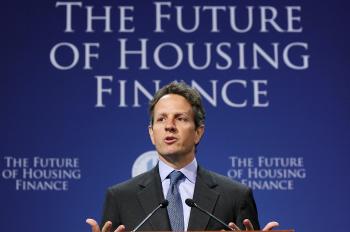 Treasury Secretary Tim Geithner speaks during a Conference on the Future of Housing Finance at the Treasury Department on August 17, 2010 in Washington, DC. (Mark Wilson/Getty Images)
Business & Economy

Future of Fannie, Freddie in Question

The two companies were formed more than 50 years ago to help guarantee mortgages enabling more banks to lend and encourage home-ownership, but since the financial crisis and the recent housing collapse, the firms have been losing massive amounts of money.

"Fixing this system is one of the most consequential and one of the most complicated economic policy problems we face as a nation,” said Treasury Secretary Timothy Geithner in a conference on Tuesday, published on the Treasury’s website.

In an interview with Fox Business Network, House Financial Services Committee Chairman Barney Frank said that Fannie and Freddie “should be abolished.”

"The only question is what do you put in their place,” Frank said. “This is a situation where given the importance they had come to play in housing, you can't tear down the old jail until you build a new one.”

But it’s easier said than done. Fannie and Freddie together ensure that interest rates remain low for potential home buyers by guaranteeing their debt.

“We need to work to foster a strong but healthy market for private capital—to harness the vitality, innovation, and creativity in our system in a responsible way, so that consumers and communities gain real benefits without the race to the bottom that we have seen in recent years,” said Shaun Donovan, secretary of the Department of Housing and Urban Development at the Housing Finance Conference Tuesday.

So far, the two companies have cost U.S. taxpayers $150 billion.