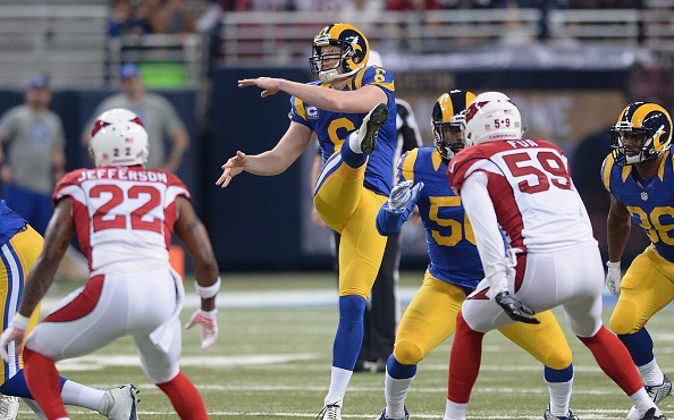 See what got him the foul, and then the aftermath below:

This is funny, watch @STLouisRams punter Johnny Hekker dish out a hit but then want no part of taking one pic.twitter.com/6coMXaj6R2

Basically, Hekker apparently thought he’d take an opportunity to take a cheap shot on Seahawks defensive end Cliff Avril, as if to say “hey, punters are football players too.” But as Avril got back up to return the favor, Hekker no longer wanted any of what he started.

And apparently, this isn’t the first time Hekker’s been involved in some fishy business.

After dominating the past several weeks, the Seahawks saw their streak end in a 17-23 loss to the Rams.

The Rams defensive line dominated the Seahwawks offensive line.. The Hawks’ lineman could get no push at the point of attack, thereby providing no running lanes for Christine Michael and Brice Brown, and forcing Russell Wilson to scurry around in the backfield behind a collapsed pocket. The Seahawks will be excited to get left tackle Russell Okung back for the playoffs.

Other than that, it was just an all-out flat effort by the Seahawks. The Hawks’ had just 60 total rushing yards, while Todd Gurley ran for 85 on 19 carries for the Rams. The Rams also had a fumble return for a touchdown. The Seahawks failed to recover their two forced fumbles, with the result being that the Rams were able to sustain their drive by recovering their own fumbles, which actually happened on consecutive plays.

Meanwhile, the Seahawks made a lot of stupid penalties on both sides of the ball, dropped some passes, dropped some interceptions, and sometimes that’s all it takes. The Seahawks outgained the Rams by over 100 yards and limited the Rams to just 3.9 yards per play, but at the end of the day, the Rams were victorious on the scoreboard.