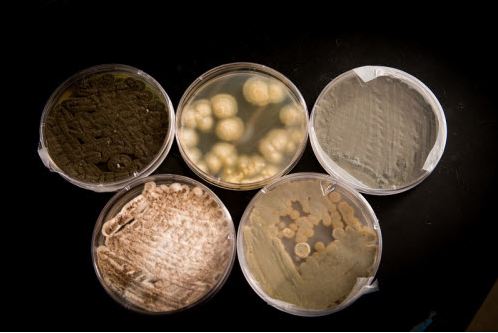 “As far as I can tell, the fact that they don’t put preservatives in this is really allowing lots of fungi to survive the drink process,” she said in an article published by the university.

Dannelly recruited Leah Horn, a senior biology major from St. Louis, to spend a year filtering Capri Sun through a vacuum and seeing if any fungal microbes remained behind and grew on filter paper.

Five were found: three in the tropical punch flavor, one from the Roaring Waters flavor, and another from the fruit punch flavor.

Horn said she’s not 100 percent sure which species of microbes they are; the researchers are still testing them.

Kraft Foods said in a statement in 2010 that they confirmed it was mold in a Capri Sun pouch when the issue first arose.

“As a general food safety tip, please remember that because Capri Sun beverages don’t have preservatives, a leaky pouch can cause the beverage to spoil and discarding it is the right action to take,” the company said.

“The significance of this is that for the majority of people, other than being grossed out when you open a package and it has a large fungal mat, which is a really nasty looking thing, it will probably not hurt you,” Dannelly said. “However, in patients who are immune-compromised and some other underlying diseases, this could create a health concern for them.”

Dannelly and Horn will test the theory that so-called fungal mats grow in packages that are compromised. They’ll puncture packages and see if the spores will grow.

“Maybe what happens is that the package just gets breached enough, not a big hole, a tiny pin hole that’s enough to let air and oxygen in so that gives fungi room to grow, what they need to grow, then you get fungal mats,” Dannelly said. “Maybe that’s why it’s only occasionally there’s the large growth of an organism.”

In the meantime, all five types of fungus likely aren’t harmful.

“Probably, those of us with healthy immune systems, we could even eat that, and that wouldn’t be a problem,” Dannelly said.