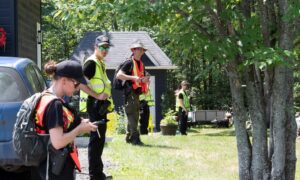 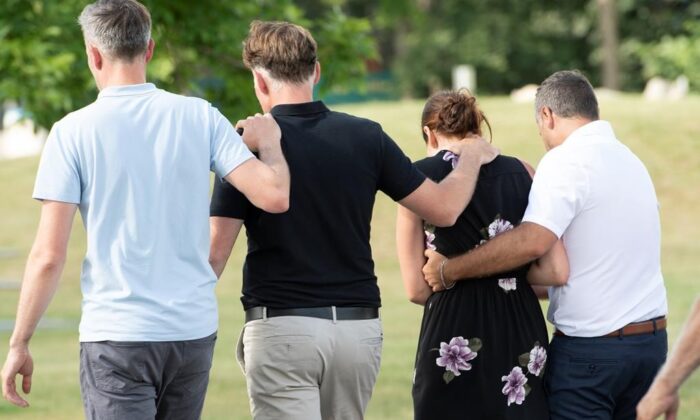 Amelie Lemieux (2nd R), is comforted by family members as she leaves a memorial for her two daughters, Romy and Norah Carpentier, in Levis, Que., on July 13, 2020. (The Canadian Press/Jacques Boissinot)
Canada

LEVIS, Que.—A funeral will be held in the Quebec City area Monday for two young sisters who were found dead following an Amber Alert.

The bodies of Norah and Romy Carpentier, aged 11 and 6, were found in the woods on July 11 in St-Apollinaire, southwest of the provincial capital.

Their father, who was suspected of abducting them, remains missing.

Quebec provincial police suspended their ground search for 44-year-old Martin Carpentier over the weekend after 10 days of searching but say they remain determined to find him.

Police believe Carpentier and his daughters were involved in a car crash on July 8, but nobody was inside the vehicle when responders reached the scene.

The funeral in Levis, Que., will be limited to family due to COVID-19 concerns, but screens will be set up outside for others who want to attend.

The family posted a message on the funeral home’s website to thank all the police, emergency responders and volunteers who did everything they could to bring the girls home.

To Norah and Romy, they wrote: “We will always regret not having had more than the 11 and six springtimes you were present in our lives, but the memories and love you gave us will remain etched in us forever.”

A senior provincial police spokesman said Monday that if Martin Carpentier is still alive, he has likely almost run out of resources.

Police had intensified their search on Thursday after alleging the fugitive had taken items from a trailer within the search perimeter to help his survival.

But Chief Insp. Guy Lapointe said Monday that four days have passed since then, and investigators believe Carpentier is ill-equipped to ensure his basic needs for an extended period.

Police say if he is alive, Carpentier’s physical appearance has likely changed, and he may be weak, distressed and unable to make rational decisions.

Lapointe said it would be extremely difficult for anyone to survive in a dense forest for so long, let alone when they are the subject of an intense manhunt.