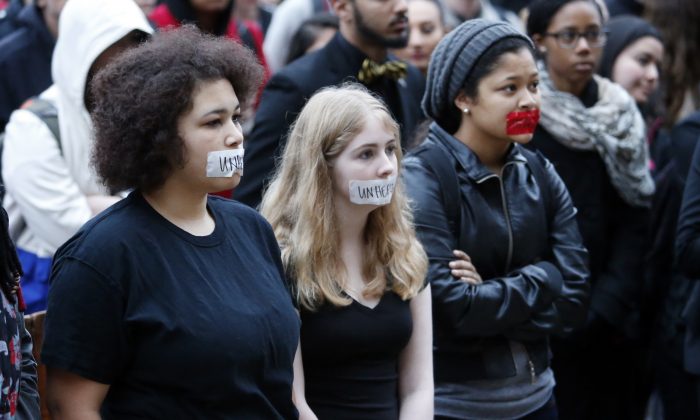 Students at the University of Oklahoma protest racist comments made by a fraternity on Monday, March 9, 2015 in Norman, Okla. University President David Boren lambasted members of Sigma Alpha Epsilon fraternity on Monday who participated in a racist chant caught on video, calling them disgraceful and their behavior reprehensible, and ordered that their house be vacated by midnight Tuesday. (AP Photo/The Oklahoman, Steve Sisney)
US

The president of the college and of the national fraternity condemned a video that showed alleged members of the Sigma Alpha Epsilon fraternity at the University of Oklahoma chanting racist slurs on a bus. There was silence from the thousands of alumni, with the exception of one whose response could be interpreted as racially insensitive.

“There will never be a n—- SAE. You can hang him from a tree, but he can never sign with me,” the young men chanted in the nine-second video where they smiled and clapped along.

SAE was founded in Alabama on March 9, 1856. Its roots trace to the Confederacy, the pro-slavery states that seceded from the union rather than abolish slavery.

The Oklahoma University chapter displayed a Confederate flag, according to the student newspaper, and the fraternity has a long history of questionable conduct resulting in sanctions.

In response to the incident over the weekend, the national fraternity shut the chapter down, and the university president gave SAE members until midnight Tuesday to clear their belongings from the SAE house. Hundreds of students and faculty rallied on campus before dawn on Monday to condemn the behaviour. Someone painted “Tear it Down” on the university SAE house Sunday night.

In an apparent misguided attempt to do good, SAE alumnus Blake Burkhart started a fundraising campaign for the SAE house cook, whom he named only as Howard. A picture on Indiegogo  shows a black man smiling, wearing a cook’s cap.

“Because of these kids’ actions, many will be affected. None more so than Howard,” wrote Burkhart. “Those of you who lived in the house, undoubtedly came to love Howard and his infectious smile (if not his chili dogs).”

The SAE alumnus did not make clear if Howard wanted charity.

Burkhart did not make clear if Howard wanted charity.

He said Howard will be surprised when he reports to work at the SAE house Tuesday to find it closed. Burkhart wrote that the people in the racist video had destroyed something that took years to build.

It is not known who recorded the SAE video. OU_Unheard, a black student group posted it on YouTube. They are an “alliance of Black students organizing for change within the campus administration and atmosphere at the university,” according to their website. They tweeted the video to the campus president over and over again Saturday, using the hashtag #SAEHatesMe.

SAE chapters have been banned, suspended, sanctioned and put on probation at dozens of campuses.

SAE is the nation’s deadliest fraternity.

SAE is the nation’s deadliest fraternity, because of at least 10 hazing deaths in the past decade, Bloomberg News reported.

The motto of SAE is to be a true gentleman. Yet brothers at scores of chapters have done things no gentleman would do, including scores of incidents involving the abuse of prospective members, violations of campus alcohol rules, and sexual misconduct.

Barely three months into 2015, four SAE chapters have incurred serious sanctions. And in 2014, 13 SAE chapters were sanctioned, including the one at Princeton, where SAE was suspended indefinitely, and all active members were suspended. Yale banned SAE for sexual misconduct from campus until August 2016. Twenty-one groups were sanctioned in 2013. In 2012, when 32 SAE groups were punished, UC−Davis closed its SAE group for five years for alcohol violations.

An SAE is a member for life, but the Oklahoma University members who chanted slurs may be expelled from the fraternity if they can be identified. Members at other groups have been suspended or kicked out.

The president of SAE is trying to combat the abusive culture. The president of Oklahoma University is trying. The question is, do alumni support the efforts for change?  They resisted the national organization’s 2014 ban of pledging, which was meant to stop hazing. Hazing in at least one incident was so severe it amounted to torture, according to Bloomberg news.

“I was not only shocked and disappointed, but disgusted by the outright display of racism displayed in the video,” said Brad Cohen, the fraternity’s national president, in a statement.

I was not only shocked and disappointed, but disgusted by the outright display of racism displayed in the video.
— Brad Cohen, national president, SAE

“SAE is a diverse organization, and we have zero tolerance for racism or any bad behaviour. When we learned about this incident, I called an immediate board meeting, and we determined with no mental reservation whatsoever that this chapter needed to be closed immediately. I am proud of my fellow board members because we mean what we say,” said Cohen.

The national fraternity has a nondiscrimination policy, and on its main Web page, posts images of true SAE gentlemen who are both white and black.

That was when he announced the fraternity would stop initiating pledges on Founders Day, March 9, 2014. “Our fraternity could not withstand another major hazing incident, let alone another death,” wrote Cohen at the time.