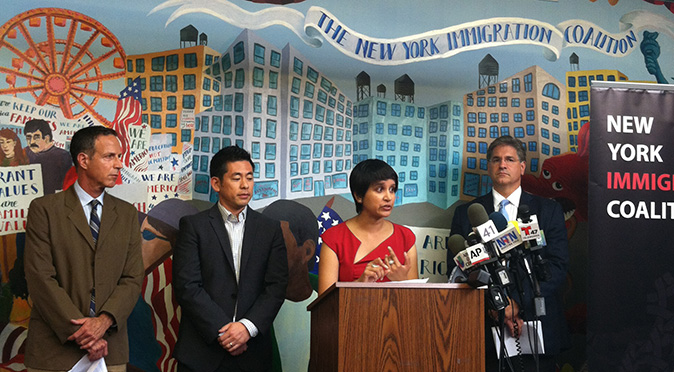 NEW YORK—Immigration service providers and the city are working closely to streamline resources for nearly 3,300 child migrants who have reunited with family in New York. But for the additional 7,000 who are expected to arrive in New York by the end of the year, it is unclear how such services will be funded for them. And for many, mental health care is a top priority.

“We need more resources to fund this,” said Steven Choi, executive director of New York Immigration Coalition. “Right now the government is taking money from existing refugee services—that are not well funded to begin with—to pay for this.”

The most important services the migrant children will need are attorneys and mental health care, and both are costly.

According to a United Nations report, 60 percent of child migrants are eligible for relief. The children, however, are not likely to receive relief if they do not have an attorney.

According to research from Syracuse University, 9 out of 10 children were deported if they did not have an attorney. As for the 52 percent who were represented by an attorney, five out of ten were allowed to stay in the U.S.

There are a number of pro bono attorneys volunteering to assist the child migrants. Safe Passage Project holds trainings for attorneys who are interested in representing immigrants. But experienced immigration lawyers are still in dire need.

“Pro bono attorneys provide basic support for cases that are not as complex,” said Elizabeth Plum, a coordinator for NYIC. “But some cases take decades. We really need knowledgeable lawyers who understand special juvenile laws, and are familiar with victims of trafficking and crime.”

Even if the children do have an attorney, they need critical mental health care.

“We do have one major concern, and that major concern is mental health problems,” said Dr. Alan Shapiro, co-founder of immigrant youth clinic Terra Firma.

“I had one patient, 15 years old, tell me about how he came home from school with a friend and they were assaulted by a gang,” he said. “His friend was killed in a very, very violent way.”

Moreover, schools need resources to assist migrant children as they assimilate with students who have not been through traumatic events.

According to Nisha Agarwal, Commissioner for the Mayor’s Office of Immigrant Affairs, there are currently enough resources.

“Our goal is to coordinate already existing services,” Agarwal said. “We are already doing this work. We are not focused on creating new infrastructure, but using the resources we already have.”

But is unknown how service providers will assist the 7,000 that are to come.

“This is an incredible influx of children with many needs,” Plum said. “Our providers are already at capacity.”

Obama requested $3.7 billion from Congress to assist the influx of child migrants at the border. Some fear the money will only be granted at the cost of the 2008 Trafficking Victims Protection Reauthorization Act (TVPRA).

Republican members of Congress say they support additional funding if VPRA is altered in a way that allows children to be deported more quickly.

“It’s difficult to say if the money that Obama has proposed won’t be granted without revoking the TVPRA,” Plum said. “I can’t give an educated guess, but it’s more likely than I am comfortable with.”