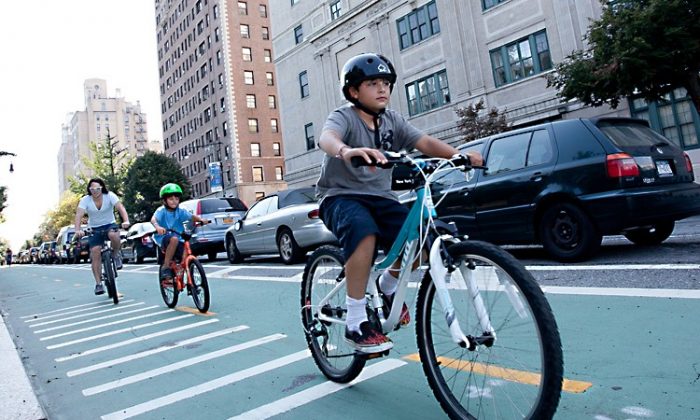 NEW YORK—Funding for the city’s plan to reduce traffic deaths with 50 major street redesigns a year and meter-pausing technology for taxis is not likely to be included in this year’s budget.

Vision Zero implementation is already underway at the Department of Transportation and a solid schedule is soon to come, says commissioner Polly Trottenberg, but for now the department will work with the money it already has, and hope for more capital dollars in upcoming years. Vision Zero is the mayor’s plan to reduce pedestrian deaths to zero.

At the City Council’s transportation committee preliminary budget hearing March 6, chair Ydanis Rodriguez pressed for more specifics on funding and timeline, but agency heads did not have answers.

However, the mayor’s office is putting together an online real-time tracker of Vision Zero actions and metrics.

“Hopefully pretty soon we’ll have something transparent that everyone can take a look at,” Trottenberg said. Its launch date has yet to be announced.

The preliminary budget was put together before the Vision Zero roadmap was, but the council and related departments have recognized the need for more funding.

Councilmember Brad Lander said that over time as safe street design becomes the standard, the city will be committing capital dollars to those measures, “but that’s not to say we should increase the budget this year.”

Council members have also raised the idea of using their member items to fund street redesigns in their districts, and Trottenberg said that would be explored as the department hosts more town halls around the city and drills down on specific locations.

Trottenberg also asked the Council to help push Albany to allow DOT to use a design-build, which means the same contractor would be responsible for the designing and building of the project. This is considered experimental for transportation projects, according to U.S. DOT.

Currently, if there are cost overruns, DOT is responsible for making up the difference. With a design-build process, that risk is shifted to the contractor.

Juan Martinez of Transportation Alternatives said funding Vision Zero would ultimately save the city money. According to 2010 DOT numbers, traffic crashes cost the city about $4.29 billion a year, over 12 percent of which is incurred by taxpayers.

Likewise, the Taxi and Limousine Commission (TLC) is still putting together pilot plans, and does not know what the costs are yet.

TLC Chief Operating Officer Conan Freud said there are already initiatives in place, like public service announcements and sending safety reminders to taxi drivers and passengers, because those do not require any additional dollars.

However, programs like technology to pause the meter if the driver is speeding still needs to be explored, and TLC won’t have a budget ready for that for this year.

The New York City Police Department, which did not testify at the hearing, will require more resources as well. The department will be adding speed detection equipment, training programs, and personnel for the Vision Zero plan.