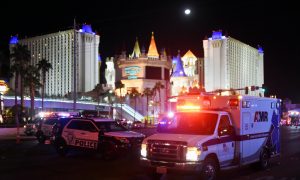 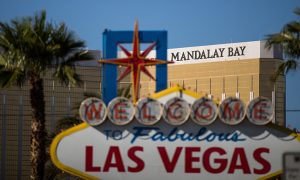 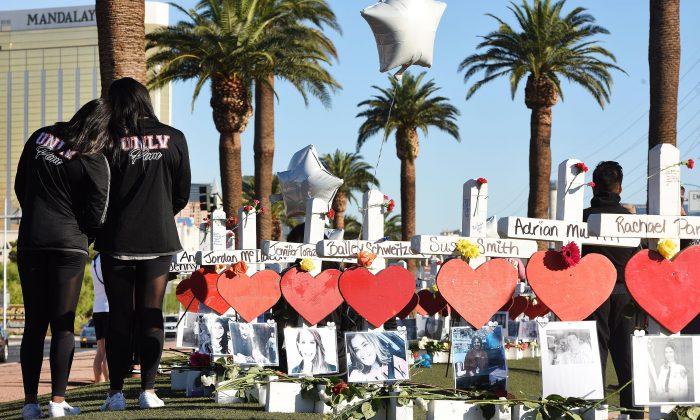 Members of the University of Las Vegas pom squad visit 58 white crosses for the victims of the Oct. 1, 2017, mass shooting on the Las Vegas Strip just south of the Mandalay Bay hotel, Oct. 6, 2017. (Robyn Beck/AFP/Getty Images)
US News

The families of another 10 victims who were paralyzed or suffered permanent brain damage will receive this same amount, according to USA Today.

The nonprofit Las Vegas Victims’ Fund (LVVF) published a chart showing how the money it has raised will be disbursed to 532 injured individuals, based on the level of damage each incurred.

A statement on the fund’s webpage states that all of the money raised will be distributed among the victims. Payments will be sent out starting Monday, March 5.

“In no way can it replace someone’s life,” said Al Etcheber, whose sister-in-law Stacee Etchebe died in the shooting. “Still, it is a real nice way to help families who lost someone they loved.”

The fund began as a simple GoFundMe page, but attracted so many donations it was transformed into a registered nonprofit organization. The fund received more than 90,000 donations.

“The love and support shown for the families and survivors of the October 1st tragedy was tremendous,” said Scott Nielson, chairman of the Las Vegas Victims’ Fund Committee, on the fund’s site.

“We recognize, however, that money cannot replace a life lost or forever changed due to this tragic event.

“What the committee worked hard to do was distribute the gifts given by tens of thousands of people in a way that would help those families and survivors most severely impacted by October 1.”

Almost 40 percent of the money raised came from Nevada gambling, tourism, and entertainment companies, including $5.2 million from the Vegas Strong Fund, according to the LVFF’s webpage. The Direct Impact Fund and the National Compassion Fund also merged into the Las Vegas Victims’ Fund.

Green Valley High School in the nearby suburb of Henderson, Nevada, raised more than $66,000 through T-shirt sales, according to the fund’s website.