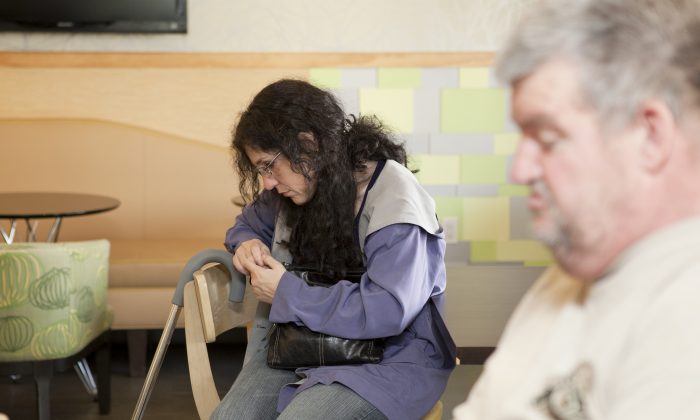 Michael Dautheny (foreground) and Allison Puglisi on May 7 at the Staten Island Ramada Inn, where the two have been living after Hurricane Sandy made them homeless. (Samira Bouaou/The Epoch Times)
New York

NEW YORK—It started with a phone call last Monday and ended as a rescue mission, of sorts.

But that’s just what Peter Gudaitis, chief response officer with New York Disaster Interfaith Services (NYDIS), does. His organization manages the Sandy Unmet Needs Roundtable (Roundtable), a resource of last resort for Sandy victims who have exhausted every other avenue of help.

In this case, Monday’s call was about a group of a couple hundred still-homeless Hurricane Sandy evacuees who were facing eviction from the hotels they’d been staying in. The evacuees, some of whom were within a week of moving into a new home, were kept off the streets by a last-minute NYDIS intervention that came about through the work of the Roundtable.

The Roundtable’s group of stakeholders, major donors, and organizations, includes the Salvation Army, the American Red Cross, United Way of New York City, Lutheran Social Services of New York, Convoy of Hope, International Orthodox Christian Charities, and others. The groups collaborate with the Federal Emergency Management Agency (FEMA) and the Human Services Council of New York to help Sandy victims—and they have been hard at work since April.

Unmet needs roundtables are a FEMA best practice for federally declared disasters that help all affected people, regardless of immigration status. The caveat is that you must have exhausted all other possible forms of assistance.

The Roundtable—which relies largely on donations from corporations, foundations, congregations, and individuals—wants to keep running for two more years. Gudaitis hopes that a presentation Oct. 25 at a Philanthropy New York conference will allow the organization to make its case for more help.

The Roundtable’s goal is to raise $12 million and spend it in helping New Yorkers by October 2015. It has about $8 million now.

Though the word “roundtable” evokes an image of key players sitting concertedly around a large table, the reality is that many important conversations to help Sandy victims happen by phone. Gudaitis doesn’t see that changing.

That doesn’t mean that NYDIS doesn’t engage with the community, though. It meets with the Roundtable twice a month in each impacted borough, and has a dual meeting once a month that covers Manhattan and the Bronx. The NYDIS office has two full-time staff who do nothing but attend meetings throughout all five boroughs, effectively spending just 10 percent of their workweek in the office.

Though the Roundtable helps clients who face what it calls “extreme unmet needs,” such as emergencies, which prevent long-term recovery, or needs preventing self-sufficiency, it doesn’t deal directly with victims.

“We work with the case managers, rather than the clients,” said Gudaitis. “Clients shouldn’t have to go begging for their own help.”

Any New Yorker who was affected by Hurricane Sandy can access disaster case managers at any time by calling 855-258-0483. Though keeping the Roundtable running for two more years might seem a little lengthy, past experience has shown there is a long-term, ongoing need for assistance following disasters.

“There’s a lot of people who need help, which is why it’s critical that the Roundtable remains well funded,” said Gudaitis.