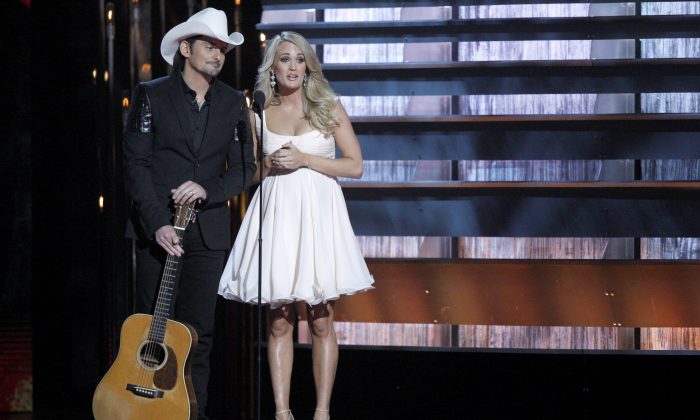 NASHVILLE, Tenn.—Coffee, guitars and buses will keep the cast and crew running behind the scenes at the 49th annual Country Music Association Awards, airing live Wednesday on ABC Television (8 p.m. Eastern) from the Bridgestone Arena.

The event includes three days of rehearsals leading up to one of country’s music biggest nights on television, with performances by Reba McEntire and Brooks and Dunn, Justin Timberlake, Luke Bryan, Carrie Underwood and Miranda Lambert.

Here’s a look at how the show breaks down statistically, according to the CMA:

— As few as five minutes is sometimes how long co-host Carrie Underwood has to get off the stage, get to her dressing room, put on a new dress and get back on the stage. On last year’s show, Underwood got quite a workout running back and forth because she had 10 different dresses.

— Co-host Brad Paisley wears boots, keeps on the same pants, but changes his shirt and suit jacket about four times during the show.

— Four hair and makeup artists are provided by the show, which doesn’t include the glam teams that come with the artists and the presenters.

— 1,495 meals are served throughout rehearsals and on the day of the show. The artists and crew also have access to a juice bar and a coffee bar.

— Over 50 pounds of brewed coffee and 3,000 coffee cups will be available.

— 68 guitars will be used by artists and musicians on the stage throughout the show.

— Eight dancers will be performing onstage for three different performances.

— 134 musicians will be backing up the main performers onstage.

— 562 crew and vendor credentials, 1,296 artist and publicist credentials for backstage and more than 100 media outlets covering the show.

— 20 artist buses will be parked outside the Bridgestone Arena on the day of the show.

— 157 airline flights were booked for crew and talent to fly in and out of Nashville for the show.

— 15 trophies will be used for the winners’ walk onstage and backstage pictures. The winners will receive their individual trophies with their names engraved on them at a later date, but artists get to pose backstage for photos with generic trophies and then hand them back.

— 59 artists, bands, writers and producers are nominated in 12 categories.